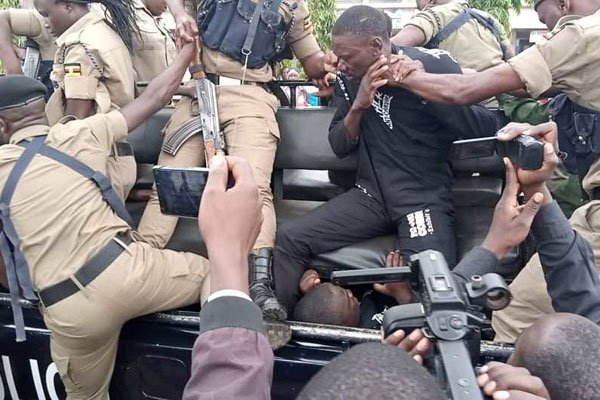 Police in Kampala have arrested a group of youths who call themselves ‘The Alternative’ for staging a protest against rampant corruption in the country.

Armed with placards, the activists under the auspices of Black Monday tried to march across the city to show their displeasure with graft but were intercepted by Police Officers along Kampala-Entebbe road when they were trying to evade arrest during their anti-corruption protest on January 13, 2020.

The activists were arrested during their Monday morning anti-corruption campaign which was termed as “The Real Anti-Corruption Walk”, mocking President Museveni’s walk that held at Kololo airstrip last year.

At the start of December 2019, Museveni led hundreds of people in a march against corruption; calling corrupt people parasites who steal public wealth adding that to end corruption, leaders must develop the economy.

Critics note that in 2018, Transparency International ranked Uganda as one of the most corrupt countries in Africa, below Kenya, Mauritania, and Nigeria.

“He’s, therefore, the one [to] whom the citizens are supposed to walk and show and demonstrate that they are angry about corruption. Now, to whom is he angry? So, we really think that he is playing politics.”

In the same way, Uganda’s inspector general is also accused of holding only lower-level officials or private citizens to account for corruption yet top government corrupt officials are left languishing around.

The inspector, Irene Mulyagonja, acknowledges that some top government officials hide behind Museveni but argues the president is sincere in tackling corruption.