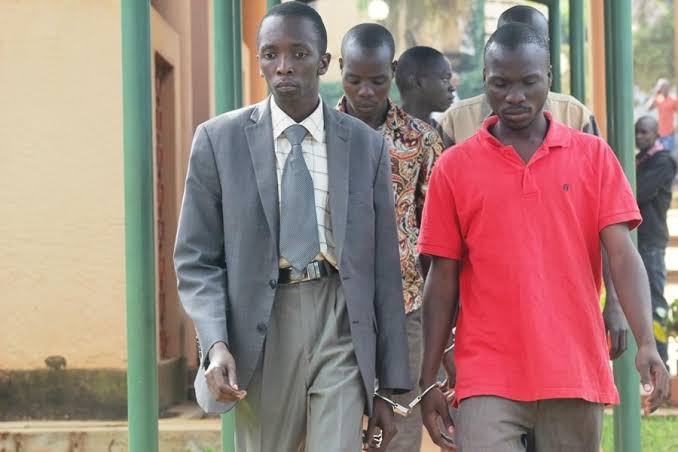 Brian Bagyenda son to ISO Boss Kaka Bagyenda who is accused of killing his 22-year old girlfriend Enid Twijukye in January 2016, yesterday decided to remain silent in court instead of defending himself against the charges.

A suspect is at liberty not to defend him or herself in a trial and stays silent. This means that the prosecution cannot cross-examine (ask probing questions) the suspect to test his/her defense.

Bagyenda, 29, and two others Innocent Bainomugisha, 24, a cleaner, and Vincent Rwahwire, 28, a casual worker, appeared in court for the hearing of their defense yesterday.

However, one of the defense lawyers, Mr. Allan Sserulika, told court that Bagyenda had opted to remain silent while his two alleged accomplices made their defense in sworn affidavits where the prosecution will cross-examine them to test the merit of their defense.

Court also heard that the three defense witnesses of Bagyenda, who include his father, the Internal Security Organisation (ISO) director-general, Col Frank Bagyenda Kaka, Jane Frances Bagyenda, Asiimwe Bagyenda, and Dr. Brian Mutamba, a psychiatrist from Butabika Hospital were unable to appear in court to defend him.

“At the last hearing of the case, we had prayed for witness summons. However, they were unable to appear. Our biggest problem is one of them is a nun and is undergoing a convention taking 18 days while Col Kaka is out of the country on state duties,” Mr. Sserulika said.

However, Bayenda’s two co-accused, Bainomugisha, and Rwahwire told court that they knew Bagyenda as they helped him out in cleaning his compound whenever he contacted them.

When asked by the state attorney whether they could do anything if they were requested by Bagyenda, the suspects said they would help out since he was their boss.

At the last hearing, Mr. Nsubuga Mubiru, Bagyenda’s lawyer, tendered in a medical report from Butabika mental rehabilitation hospital to prove the claim that he was mentally unstable at the time he committed the offense.

Prosecution states that on January 4, 2016, at Njobe Road in Nakawa division, Kampala District, Bagyenda and his two co-accused murdered Twijukye.

Bagyenda and his two accomplices were then ordered by High Court Judge Moses Kazibwe Kaumi to defend themselves following a ruling that the 16 prosecution witnesses had proved a prima facie case (reasonable evidence) against the trio.