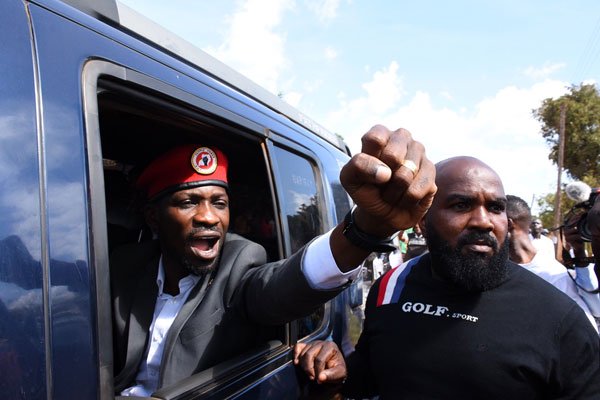 Kyadondo East legislator Robert Kyagulanyi, aka Bobi Wine, has changed approaches, opting for more innovative ways for his presidential consultation meetings ahead of 2021.

In the new plan yet to be unveiled; Bobi Wine roots for regular meetings with the police, and using tinted cars to avoid processions and making early bookings of venues to avoid disruptions from Police and its sister agencies.

“We are going to work more silently and try to meet all Police requirements,” People Power spokesperson Joel Ssenyonyi

Mr. Ssenyonyi said they were on course with upcoming programs after the original schedules were sabotaged by the security agencies adding that these new changes come shortly after the Electoral Commission (EC) mediated a meeting between the police and all presidential aspirants for the 2021 General Election.

“We are making bookings with venue owners because when we meet the police, we shall need to have the receipts. We are also amending dates of the meetings but we’ll still start with Kyadondo East because that is Bobi Wine’s base,” Mr. Ssenyonyi said.

A few weeks ago Police arrested Bobi Wine and his supporters as they headed to their first consultation venue that was scheduled to take place at Our Lady of Good Counsel in Gayaza, Wakiso district.

Bobi Wine was set to hold similar meetings in Gulu Town on January 7 and Lira Town on January 8, but both functions were blocked by the police before bundling him up and dumping him at Karuma bridge with orders to return to Kampala.

After the meeting between Bobi Wine, Police and the Electoral Commission, Police issued a statement saying that they had agreed on no processions but would hold more meetings on management of traffic during the consultations as provided for by the Public Order Management Act, 2013.

“We shall take all necessary steps to make sure the police are satisfied. We want to see where police would come out and make it difficult for us to meet the people for consultations,” Mr. Ssenyonyi said.

In reaction to Bobi Wine’s change to strategies, Mr. Crispy Kaheru, the ex-coordinator of Citizen Coalition for Electoral Democracy in Uganda (CCEDU), said it is good that the police have mounted pressure on Bobi Wine and he has responded by becoming innovative.

“But if Bobi Wine begins to mobilize silently, the police or anyone responsible should worry. They have been hearing what he has been saying; now it will be hard. A Bobi Wine mobilizing silently is more dangerous than one who is on social media and having processions, especially if his message is lethal,” he added.

The NRM secretariat Mr. Rogers Mulindwa spokesperson, said: “Bobi Wine has chosen a better option for himself. Politics is a game of choice and when one chooses something, they should be sure that it will win them an election.”