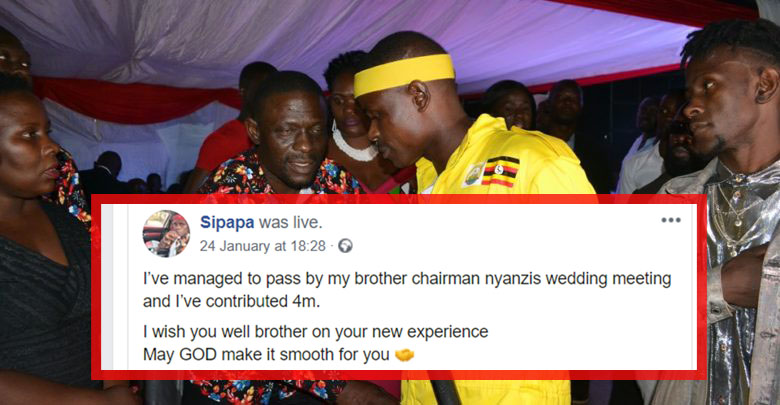 Sipapa who appeared wearing a yellow overall had been invited by Chairman Nyanzi to attend his wedding launch at Kati Kati in Lugogo over the weekend. Nyanzi asked colleagues and all friends not to mix politics in their day to day life affairs

Nyanzi appealed to all the attendees including his young brother Bobi Wine not to get divided basing on Political lines but rather to tolerate each other regardless of the different political affiliations.

Sipapa who had contributed 4m off the Museveni handouts bragged and promised to extend support needed by all opposition supporters. On the other side, the Youth advised him to wake up and start working hard rather than surviving on handouts from Museveni because very soon the regime will be no more.

Chairman Nyanzi’s wedding launch attracted a large number of prominent politicians in the Country, Musicians, music promoters and people from all walks of life who pledged to support Nyanzi’s wedding for all the work he has put in for the struggle to deliver Uganda.

However, last week Political Commentator Tamale Mirundi blasted Nyanzi saying that he was using Bobi Wine for his selfish interests because he was organizing a wedding in the middle of the struggle.