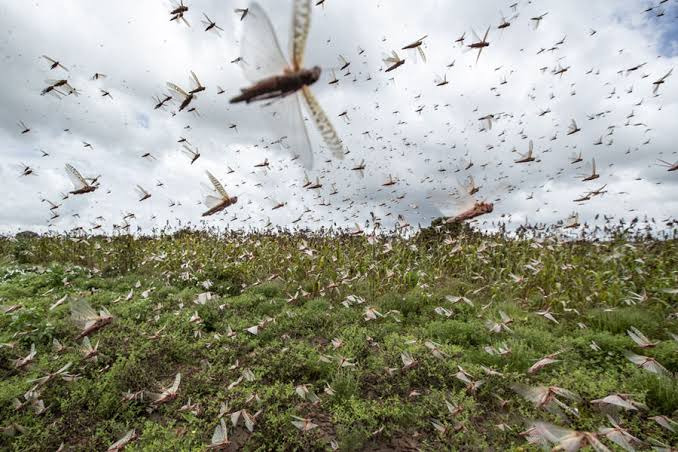 As Ugandan authorities continue to warn and advise citizens to get prepared for the desert locust invasion, news reaching our desk shows that the locusts are advancing towards the Karamoja region. The latest affected areas are Sambura and Turkana in Kenya, an area about 166km away from Karamoja. This has thrown the authorities in panic, advising citizens to stock up enough food as a precautionary measure. A team of over 2,200 UPDF soldiers has also been put in place to counter the invasion.

Locusts are deadly insects, especially for an African farmer. According to World Health Organization, a swarm can destroy crops sufficient to feed over 2,500 people for a year. Locusts can also cover over 150km in a day.

According to experts, locusts can destroy up to 200 tonnes of vegetables per day. This portrays that things may not turn out well if enough preparation is not made early. The Kenyan authorities have fought the scourge but all in vain. The five planes that were put up to spray the affected in Kenya areas almost yielded no results.

The commissioner in charge of crop protection, Stephen Tibeijuka notes that the government is doing whatever is possible to fight the locust invasion. “Farmers should report anything strange to the nearest authorities.” He said.