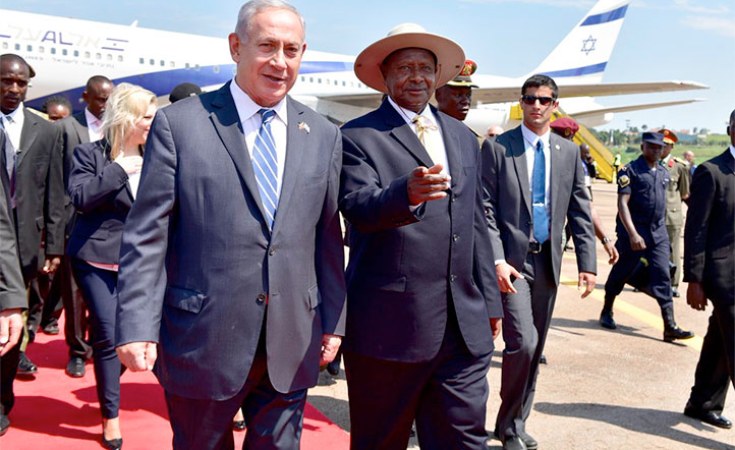 Israel Prime Minister Benjamin Netanyahu is set to visit Uganda on Monday, Next week after he concludes his trip to Russia.

Sources indicate that Netanyahu’s second official visit to Uganda will coincide with Uganda announcing that it is moving its embassy to Jerusalem.

In the instance that Uganda moves her embassy to Jerusalem, it will be the third embassy to designate Jerusalem as Israel’s capital city following America, Guatemala, and Paraguay who have since withdrawn the decision.

Netanyahu who is currently in Russia for a special meeting with Russian President Vladimir Puttin is expected to return from Moscow with Naama Issachar an Israeli –US who was sentenced by a Russian Court to Seven and half years for drug trafficking.

Issachar aged 26 was arrested at Moscow’s Sheremetyevo airport in April 2019 as she travelled from India to Israel.

Netanyahu has also just returned from a meeting with US President Donald Trump, at which a peace deal with the Palestinians was announced where Trump declared a new dawn unveiling side by side with Netanyahu but the plan was angrily rejected as biased by the Palestinians and termed as the most pro-Israel proposal ever.

However, France insisted that there needs to be a “two-state solution” to the Israeli-Palestinian conflict.

Netanyahu last visited Uganda in 2016 to mark 40 years since his brother was killed in an anti-terror raid at an airport in Entebbe.

In 2018, Israel sought a deal to send African migrants in Israel to Uganda, but the efforts broke down without an agreement. At a campaign event earlier this month, Netanyahu vowed to deport the “infiltrators” still in Israel.

The reported trip to Uganda comes weeks before the March 2 elections in Israel and on the heels of high-profile visits to the United States and Russia.