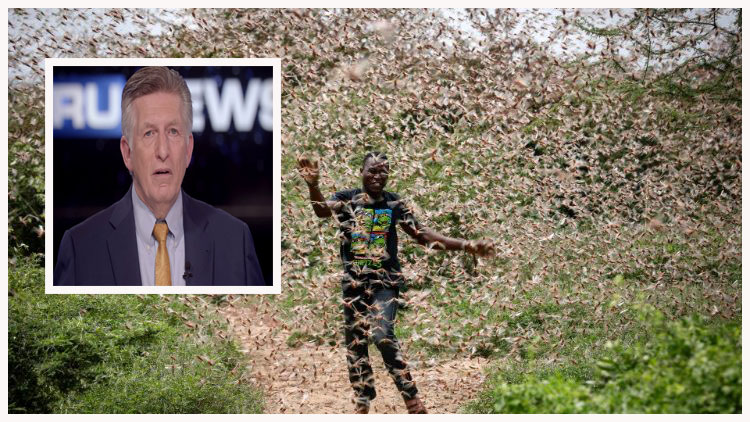 An American evangelical pastor Rick Wiles claims that the locust invasion in Kenya is a punishment from God because of corruption. and witchcraft.

During his Tru News web show, the pastor said Africa was experiencing plagues as a result of beliefs in witchcraft which is deeply rooted in the continent.

“I have encountered witchcraft in Africa, it is not the American type of witchcraft. It is deeply embedded in Africa,” he said.

He also managed to narrate how he experienced corruption in Kenya saying:

“One of the deepest corruption I have ever encountered was in Kenya. I was extorted by corrupt people in Kenya, I was asked to pay a charity tax,”. According to him, he was asked to pay $80, 000 charity tax for doing charity in Kenya and when he refused they impounded his water drills at Mombasa port and asked to pay the money in cash.

“I am not surprised that there are locust swarms in Kenya right now, I hope they eat out the lying and the deceiving. It is one of the most deceiving countries I have ever been in,” he said. “People are lying constantly and trying to steal. And these are the religious people in the church. These were religious people. It gets worse when you step out,”

The pastor also spoke about Nigeria saying it seems worse but Kenya is the most deceptive country he has ever been too.

He also compared what is happening to Kenya with the Corona Virus outbreak in China and other parts of the world, saying that God is sending plagues to sinful nations.

The far-right conspiracy theorist concluded saying the punishment can only be overcome by serious prayers and repentance.

Pastor Rick Wiles is the founder of the Dallas-based Trunews- a Christian ministry that is known for promoting racist and anti-Semitic conspiracy theories.

During the Obama regime, Trunews courted controversy with claims that Obama was ‘a devil from hell’ who was waging a ‘Jihadist war’ against the US from the comfort of the White House.