DPC pleads to Bobi Wine “Please save my Job” 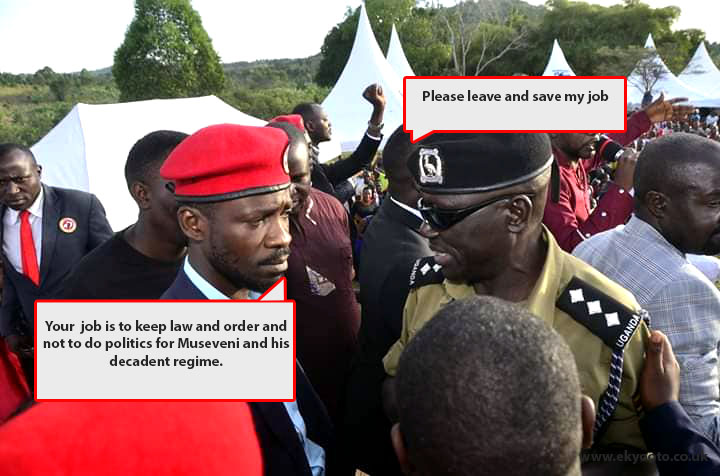 Police disrupted the thanksgiving event of Hon Patrick Nsamba`s father, a former NRA war veteran on Friday in kassanda Mubende district. The kassanda north MP had invited Politicians, leaders, and MPs to take part in the event and fundraise towards a church.

The event gave an impression of being normal until when the Host invited his fellow legislators on stage for introduction towards the gathering.

“But we also told him that his job is to keep law and order and not to do politics for Museveni and his decadent regime.” Bobi wine said

While on stage with other lawmakers the DPC grabbed the microphone and declared the meeting illegal told everyone to disperse or else they will be shot. Most of the people stood their ground and booed the police officers who unleashed chaos unto them.

Bobi wine expressed his appreciation for people of kassanda who stood their ground  in the post saying :

“I want to appreciate the hundreds of young Ugandans who stood their ground and refused to heed to illegal orders until they were pushed off with force. I can smell victory in a distance”

After a while, the MPs aborted the meeting due to threats of shooting and headed back to Kampala with police in pursuit