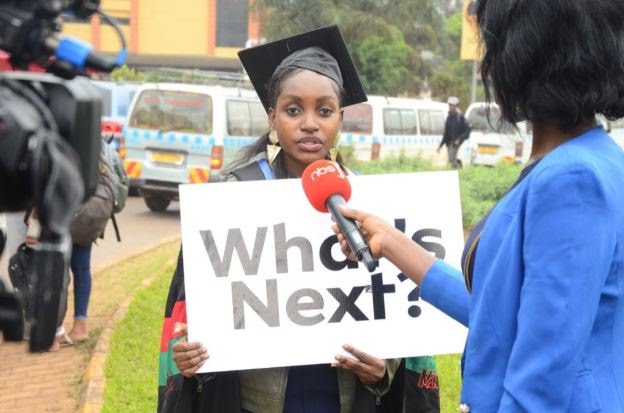 The groups were strategically positioned along Bombo road and Kampala road streets where moving vehicles would easily notice their presence. Donned in their graduation gowns, the graduates were armed with placards having inscriptions of ‘What’s Next?’ as a sign of communicating the rampant unemployment rates that have rocked the Ugandan youths. As the youths were addressing media about their grievances, police patrols from Wandegeya police station intruded and cut their protest short. They were bundled onto police vehicles which drove them straight to Wandegeya police station where they are currently in custody.

Social media users have taken to their platforms to spread the #what’snext hashtag in solidarity with the detainees.

Earlier in January, Makerere University graduated about 17,000 students in a function that was graced with the attendance of government officials from the Ministry of Education. It is not clear if all the graduates can meet the job market. This is because those in office positions do not want to pave way for the fresh graduates.

Musiri David, a student activist at Makerere University has condemned the arrest and expressed his discontent with the regime. He is at the moment rallying students to camp at Wandegeya police station to demand for the freedom of their colleagues.