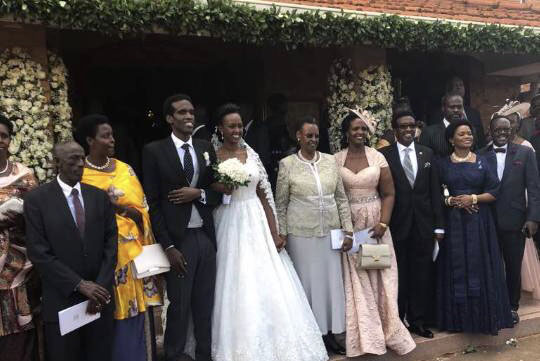 Former Health Minister Jim Muhwezi gave away his daughter Samantha Muhwezi to Jas Kassami, the son to deceased Permanent Secretary and Secretary of Treasury of the Government of Uganda Chris Kassami in a traditional marriage ceremony, February 1, 2020 at his country residence in Rukungiri.

The bride wore an all-white mushanana while her husband-to-be was smartly dressed in a black color-less suit.

While giving away his daughter, Samantha, Jim Muhwezi said he learnt from his wife’s mom, Constance that, “If you make your wife a mountain, people will worship her; if you make her an anthill people will walk over her. I decided to make Susan Mount Everest,” the bride’s father revealed adding that he says he hails from a Christian family hence not asking for bride price.

Many dignitaries attended the ceremony including The Minister for Education and Sports Janet Museveni, The Queen of Buganda Sylvia Nagginda, Gender Minister Frank Tumwebaze, UNRA Executive Director Allen Kagina, Commissioner of Prisons Johnson Byabashaija among others.

The couple was encouraged to be have steadfast faith and adore each other selflessly.