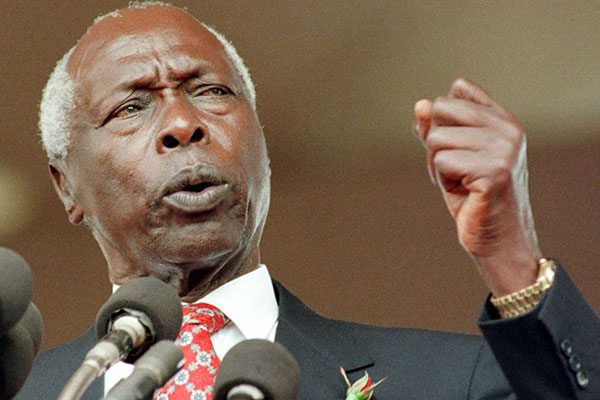 Mzee Moi has for the last few years battled ill-health  but the cause for his death is still unknown.

“The retired president has passed on, President Uhuru Kenyatta has issued a proclamation for the announcement,” a state official said, adding, a statement will be issued shortly.” President Uhuru tweeted

Daniel Arap Moi was born and raised in kabarak village by his paternal uncle Kimoi Chebbi after his Father passed on.

He belonged to the Tugen sub-group of the Kalenjin people and after he completed his secondary school education at Kapsabet High School, he was admitted at Tambach teachers training college in Keiyo District after where he attained his teaching certificate.

He started working as a teacher from 1946 until 1955 when he joined  Politics and got elected as Member of the  Legislative Council for  Rift Valley after  Dr. John Ole Tameno the former representative who had quit due to heavy drinking and suspected connections to the freedom movement.

In 1957 Moi was re-elected Member of the Legislative Council for Rift Valley and appointed Minister of Education in the pre-independence government of 1960–1961.

Moi then became President as a result of the death of the then President Jomo Kenyatta but due to popular agitation and external pressures, he was forced to allow multi-party elections in 1991.

Prior to becoming President, he served as the third Vice President of Kenya from 1967 to 1978.

Moi is popularly known to Kenyans as Nyayo, a Swahili word for “footsteps”, as he often said he was following in the footsteps of the first President, Jomo Kenyatta.

He also earned the sobriquet “Professor of Politics” due to his long rule of 24 years, the longest in Kenyan history to date.