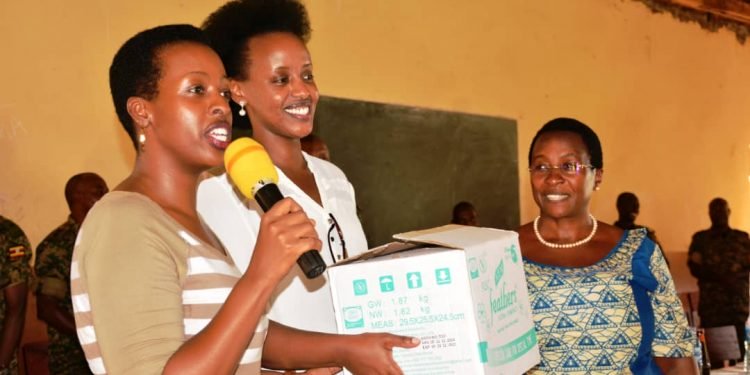 Natasha who led the grateful citizen’s group said the move was a symbolic activity to pay back to the army and the children of soldiers.

“We appreciate the sacrifices from you (children) and your parents are offering in making Uganda a better place, where peace and development can co-exist,” Karugire said.

Marcella Karekye who escorted  Natasha noted that the parents, students, and staff at Bombo Army Secondary School are a bigger part of the peace that is enjoyed by all Ugandans and there is a need to appreciate the people who contributed to the peace that is being enjoyed.

“We think of you as you as we serve this country tirelessly in your different capacities,” she said.

Maj. Gen. Leopold Kyanda the UPDF Chief of Staff Land forces applauded the group for the gesture of love and generosity extended to UPDF in championing the cause of sensitizing the population through education.

The delegation led by the first daughter donated year planners, pens, exercise books and sanitary ware to the school.

The grateful citizen’s donation function was also graced by the Ministry of Defence spokesperson Brig Gen Richard Karemire, the Chief of Education and Sports in the UPDF, Brig Gen Wilson Muhabuzi, the leader of UPDF Spouses Desk Rebecca Mugume, senior UPDF leaders and among other local leaders from the Luweero region.