Lesotho first lady surrenders self for arrest on murder charges 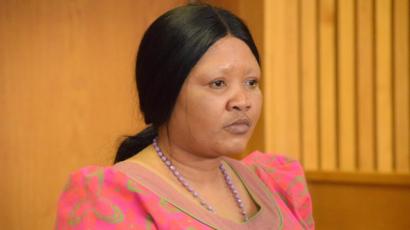 The Lesotho first lady has succumbed to pressure after days on the run following her suspected involvement in the murder of the prime minister’s wife. In a statement by the Lesotho police, her arrest was confirmed.

Meesaiah Thabane fled the country on January 10 after her arrest warrant had been issued. She is suspected to have had a hand in the 2017 murder of the former Prime Minister’s wife. A frightened Thabane evaded arrest and fled to neighbouring South Africa.

The Deputy police commissioner of police, Mokete Paseka said Ms. Thabane will spend a night in custody and then be arraigned before court if the Director of public prosecutions finalises her charge sheet.

Thabane had fled the country just a day after her arrest warrant was issued. She refused to report to the police for interrogation in links to the murder of Lipolelo, a wife from the former premier.

The killing occured two days before the prime minister’s inauguration for a second term, and two years after a court ruled that Lipelo was the lawful first lady and entitled to benefits. Thomas Thabane married his current wife some two months after Lipolelo’s death.