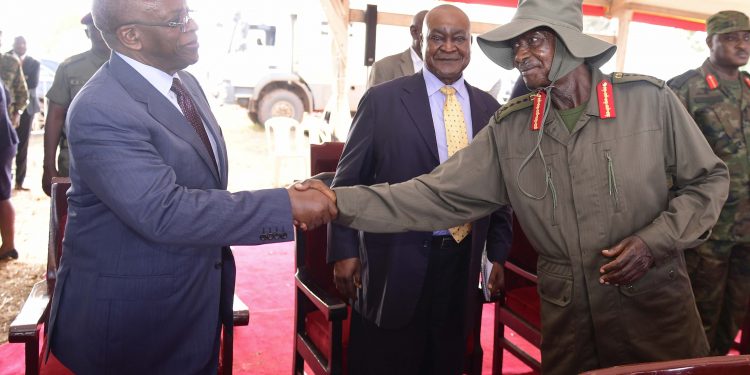 Mbabazi who was described as a surprise guest at the 2020 Tarehe Sita celebrations in Nakaseke was welcomed by a cheerful mob as he made rounds greeting and hugging the other invited guests.

“Let us welcome our former national leader, “the MC mentioned as Mbabazi moved about greeting delegates.

Some delegates and ministers he approached stood up and greeted him, while others hugged him, like a long lost comrade and among those included; The Chief of Defence Forces Gen David Muhoozi, the Deputy IGP Muzeeyi Sabiti, prison’s chief Johnson Byabashaija and many others that instead saluted him as they literally expressed excitement at meeting the once second most powerful man in the country.

At the same function, Former Vice President Gilbert was also present. But the centre of attention was on Mbabazi and not Bukenya .While it is not yet clear whether the two comrades will be coming back onto Uganda’s political scene but most probably they will soon be appointed to serve the Country again.