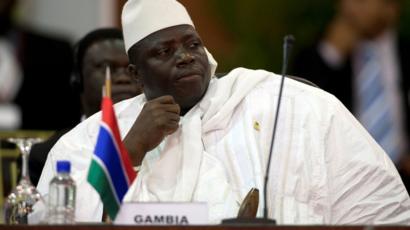 The country mansion belonging to Gambian ex-dictator was partly gutted by a wildfire, a statement from the national army said.

Located in his ancestral home village of Kanilai in western Gambia, his sprawling former private residence was engulfed by flaring wildfire on Wednesday, according to army spokesman Lamim Sanyang.

The burnt home is said to have been a detention centre during the 2 decade rule of Jammeh. AIDs patients allege that the former despot detained them in his compound in order to administer a herbal treatment of his own design. The same location is said to have been a torture point for Gambian dissidents. Dating back in 2014, three political activists alleged to have been plotting a coup were executed on orders of president Jammeh. Their bodies were three years later exhumed for decent burial.

Sanyang says the flares sparked on Tuesday in the neighbouring village of Alla Kunda were villagers unsuccessfully battled the blaze before it went out of control. A mini stadium in the complex eventually burned down but no body was hurt in the incident said Sanyang.

Jammeh ran a two decade terror reign accused of murder, torture and arbitrary arrests on dissidents. He was toppled in a joint AU and opposition led coup that led to his self exile in January, 2017.