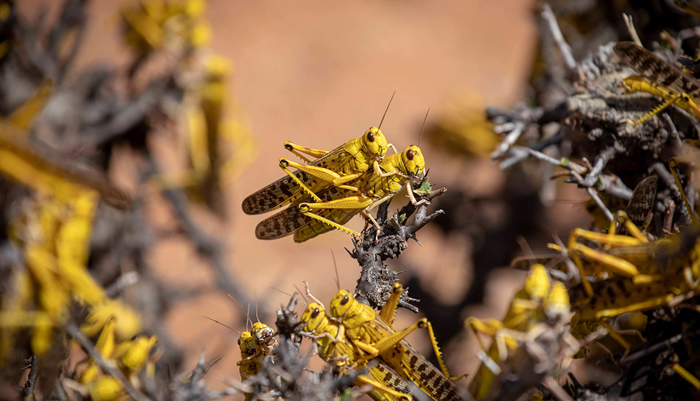 The desert locusts that have hit Kenya and left devastating results have finally hit Uganda. The Ugandan authorities have been warning the general public to prepare enough for these deadly insects that were moving towards the Ugandan land.

Our sources have tipped us that the desert locusts entered Uganda through Amudat district and it is the first to be affected lately. The Eastern authorities are in panic over the invasion and everyone is communicating to higher authorities to find the way forward.

According to our sources, Lt. Col. Ezra Byaruhanga confirmed the invasion saying that he had received a confirmatory phone call from the minister for Karamoja affairs Mr. Moses Kazige.

Ugandans are now asked to story enough food since it’s no longer an oversea story now. Many social media advisers have gone on to advise the population to convert the locusts into food since they are closely related to grasshoppers, a seasonal food source of the land.

There are other social media pundits who have gone on to declare that the essence of the desert locusts invasion is a clear reason that God is not happy with the leaders of Uganda, siting the Egyptian Pharaoh incidence.