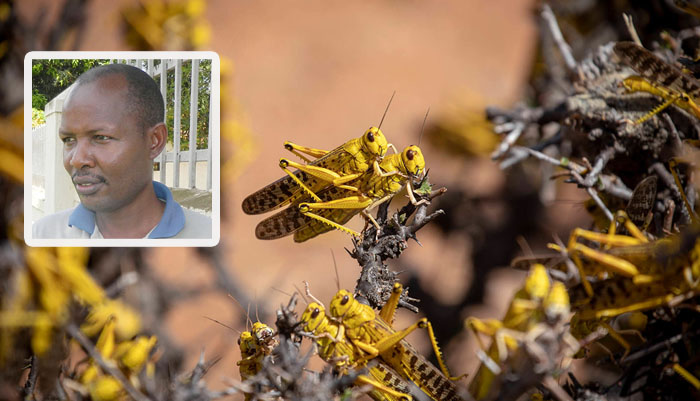 Former intelligence operative Charles Rwomushana has described the move by the government to spray the desert locusts the invaded the Country through Karamoja as the silliest idea he has ever seen or heard of.

The government has airlifted over 36000 litres of pesticides to Karamoja to contain the desert locusts that have already started spreading to different parts of the sub-region.

But Mr. Rwomushana says spraying the locusts is a recipe for disaster since the government acquired what he called fake chemicals.

“I reject the notion of spraying locusts. We shouldn’t let Museveni spray fake chemicals on the people of Eastern and Northern Uganda. We have enough proliferation of cancer. We can’t afford to add more,” he says.

Rwomushana says for close to five years, the government has failed to find proper acaricides for ticks and that there is no way they will find the right ones for locusts.

“Museveni has failed to get proper acaricides for the Ankole ticks. This system is known for fake stuff. We can easily cause deadly secondary problems,” Rwomushana adds.

Some Analysts are suggesting that Government invests in buying the locusts while the masses are encouraged to trap them for cash the same way they trap grasshoppers.

“This too is a silly idea. These insects could be vectors for deadly diseases. They were here before. They have come. They will go. Where they have passed, there is life. I don’t see a cause for panic and excitement. But the way the media portrays it is like there won’t be tomorrow. You spray and you will tell me,” he adds.

Rwomushana’s warning comes after Prof Peter Neuenschwander, a senior entomologist at the International Institute for Tropical Agriculture (IITA), warned the Kenyan government that the ongoing spraying of locusts may not save any crop or vegetation.

The same Professor who in the 1990s oversaw a program that developed alternatives for chemical control of locusts and grasshoppers, says: “Preventive control is mostly ineffective, so is spraying locust swarms adding that the key to success is the detection of moving hopper bands and their treatment.