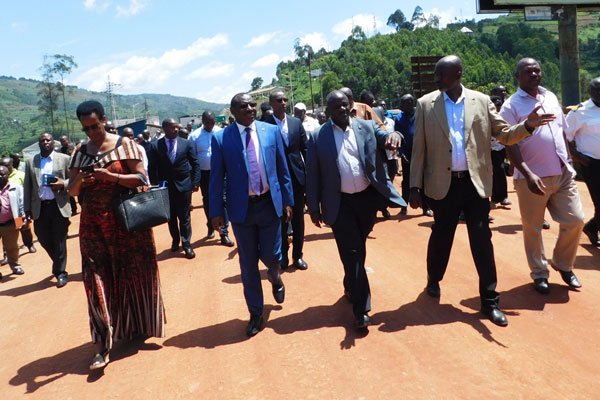 Gen. Katumba Wamala on Friday February 7 led Uganda’s delegation that engaged that from Rwanda at Gatuna/Katuna border posts in preparation for the fourth Quadripartite Summit intending to normalize relations between the two countries.

President Kagame later revealed that the move to close off the borders had  nothing to do with construction but it was a political statement to Uganda.

Kigali has since accused Uganda of among other things illegally incarcerating and deporting her citizens. The country blocked their nationals from crossing to Uganda including school going individuals.

However Uganda dismissed the claims saying on several occasions they have followed the judicial process to deport some of the Rwandan citizens who are engaged in criminal acts intended to compromise Uganda’s national security.

The meeting on Friday at Gatuna/Katuna was a result of a third Quadripartite Summit held in Luanda Angola last week between Presidents Paul Kagame and Yoweri Museveni facilitated by Democratic Republic of Congo (DRC) President Félix Tshisekedi and Angola’s President João Lourenço.

The two once loyal friends Museveni and Kagame agreed on a number of issues including resolving to hold another Quadripartite Summit in the common border between Uganda and Rwanda at Katuna (Gatuna) next week on February 21.

Nevertheless, prior to the Katuna Gatuna meeting, the two leaders agreed to dispatch delegations of the Adhoc Commission to meet at the border, which happened last Friday.

Reports indicate that the Friday meeting involved delegations from Uganda, Rwanda and Angola Unlike the previous engagements of the Ad-hoc Commission where Sam Kutesa and Olivier Nduhungirehe would lead theUganda and Rwanda teams respectively, the Friday meeting saw only new individuals.

The dignitaries were hosted in the newly-constructed one-stop border post before touring the no man’s land where the meeting between Mr Museveni and Mr Kagame is scheduled to take place.

The Ugandan delegation was led by Gen. Katumba Wamala, the Minister of Works and Transport. The team also had Oliver Wonekha, Uganda’s High Commissioner to Rwanda, Chris Baryomunsi, Minister of State for Lands and Housing, Gen. Gowa Kasiita, Director of Immigration and Citizenship Control plus their staff.

The Rwandan delegation was led by Clever Gatete, Minister of Infrastructure. It also consisted of the Permanent Secretaries from the ministries of Foreign Affairs and Lands and Infrastructure.

The team from Angola was led by Amb.Eduardo Filomeno Leiro, Angola’s Ambassador to Rwanda

The details of the meeting however remain scanty.