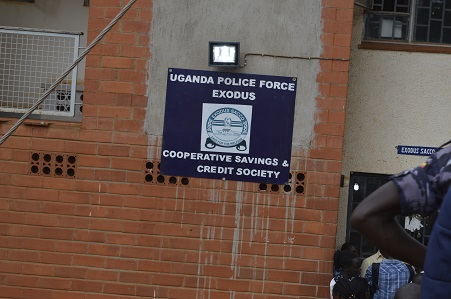 The Police Exodus Sacco Manager has been arrested for mismanagement of the Sacco money and fraud.

As investigations take shape, the suspect is currently being detained at Jinja Road Police Station over fraud allegations.

Last year, The Police Chief of Staff Brig. Jack Bakashumba ordered for an inquiry into the alleged mismanagement of the Sacco money mainly members’ savings.

Bakashumba said they were ready to investigate the matter to the dot and hold everyone who has embezzled Member’s savings accountable.

The Management of the Police Sacco has for so long been under the spotlight since its inception in 2007 after Police made it mandatory for all Police officers to save at least a minimum of Shs. 20,000 with the Sacco every month.

Despite Sacco revenue increasing each and every year, Sacco members especially the serving Police Officers have never got dividends and Members have been complaining about their failure to access loans and withdraw savings.

Parliament has since asked the Minister of Internal Affairs to present a report on the finances of the Exodus Sacco.