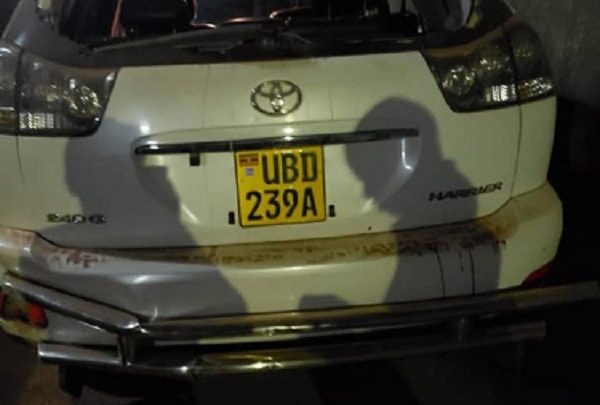 Police on Wednesday, February 12 night was embroiled in an operation tracing suspected car jackers in Bukoto, a Kampala suburb.

In a statement issued today by the Kampala Metropolitan police, the shooting of the suspects has been confirmed. Police say they were tipped by one of the citizens who was reporting a then ongoing robbery. The robbers had targeted a residence of a one Natif Nicholas of Bukoto II parish. It is further said that the robbers beat to pulp a private security guard that was watching over the home.

The police statement patterns the above events to the aggressive approach of the robbers who attempted to knock the officers with the stolen Harrier. ”The response team swiftly responded to the scene and the thugs upon sighting them, the driver attempted to knock them using the stolen vehicle.” This prompted the police officers on duty to fire warning shots in air and later at the vehicle as the thieves showed no signs of abandoning their mission.

The car owner, Natif was accidentally injured in the scuffle as a bullet plunged into his left leg. Currently he is under treatment at Nakasero hospital.

The bodies of the two thieves are being kept at Mulago city mortuary as police heightens investigations. The wave of gun violence has escalated in the urban areas of Uganda. This contravenes Museveni’s usual rhetoric of restoring peace in the country.