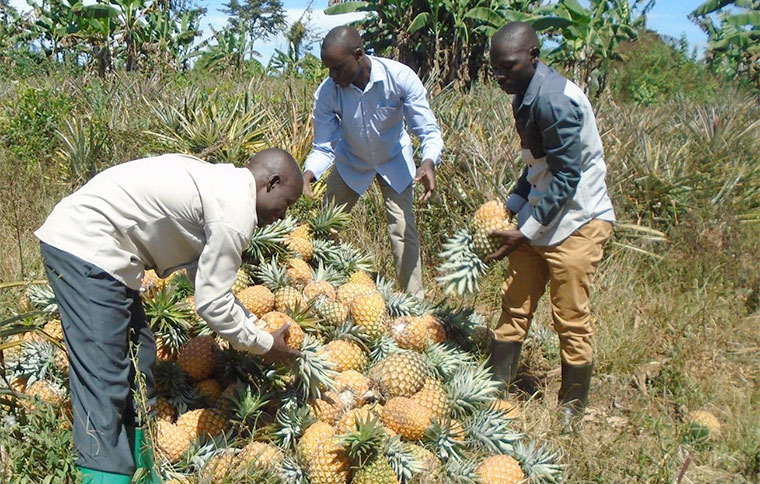 Masaka district Pineapple farmers are stuck with produce as prices drop to  Shs. 200 and lack the capacity to do value addition.

Pineapple farmers in the areas of Masaka Buwunga, Kyanamukaaka and Kyesiiga are struggling to find market for their Pineapples and some already rotting in the farms.

According to Fred Kinalwa a pineapple farmer who cultivated 17 acres of Pineapples, says they are in for a mega harvest this season and unfortunately they have failed to secure market for their Pineapples.

Kinalwa revealed that in the past at least 1000 farmers have always been targeted by the export market in the neighboring areas of DRC, South Sudan, and Kenya but surprisingly the loyal traders are now staying away without any explanation.

Due to the abundance of Pineapples and farmers struggling to recover at least their capital, Pineapples prices have extremely dropped to as low as Shs. 200 from an average of Shs. 1000

The Once popular pineapple export farmers have now resorted to producing for local markets in the neighboring towns who also consume too little compared to the Supply.

The Farmers are now pleading with the government to respond to their demands of having processing plants in the area to save them of huge losses suffered due to lack of market since they will be adding value to the Pineapples.

Moses Ssebugwawo another pineapple farmer has also warned that the government’s efforts to give farmers inputs may fail to realize the intended results of promoting commercial agriculture in the area if farmers are not supported with processing facilities that can add value to their agricultural produce to attract more earnings.

During the 2016 Campaigns,  President Museveni promised the Pineapple farmers a fruit processing plant so that they can add value to their produce but 4 years later the promise is unfulfilled.