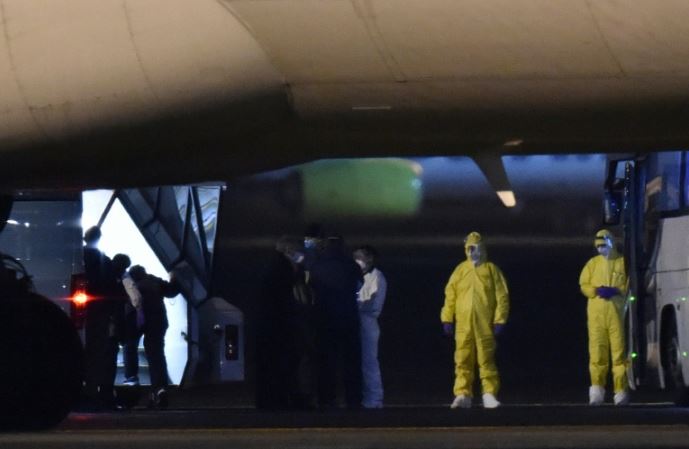 The US flew home its citizens from a coronavirus-infected cruise ship in Japan Monday, with other nations preparing to follow suit as global concerns grow over the spread of the disease and the death toll at its Chinese epicenter topped 1,700.

More than 70,500 have been infected across China by the COVID-19 virus as the world battles to contain the outbreak that has sparked panic buying and jitters over the global economic impact.
Outside China, the biggest cluster of infections is on the Diamond Princess cruise ship off Yokohama, where coronavirus cases have climbed quickly to 355 despite passengers being confined to their cabins during a 14-day quarantine.
And amid growing criticism of Japan’s handling of the ship, governments are scrambling to repatriate their citizens, with Canada, Australia, Italy, Israel and Hong Kong poised to follow Washington’s lead.

In the early hours of Monday morning, a convoy of buses driven by people in head-to-toe protective suits removed American passengers from the ship after a makeshift passport control.

A US passenger gives reporters the thumbs up while arriving with others at Haneda Airport in Tokyo for a flight home, where they will face further quarantine after already being locked down on the Diamond Princess cruise ship off Yokohama. [AFP / Kazuhiro NOGI]

There were no health checks at that point, said US passenger Sarah Arana, a 52-year-old medical social worker, who said the US government should have acted “much sooner, at the beginning.”
“I am happy and ready to go,” Arana told AFP before leaving the ship. “We need a proper quarantine. This was not it.

The US embassy in Japan confirmed two jets had left Japan en route to the US. Those on board were expected to undergo a further 14-day quarantine period on US soil.
Some Americans on the ship, however, declined the government’s offer.

“My health is fine. And my two-week quarantine is almost over. Why would I want to be put on a bus and a plane with other people they think may be infected when I have spent nearly two weeks isolated from those people?” tweeted Matt Smith, an American lawyer on the ship with his wife.
He described a fellow American passenger standing on her balcony chanting “USA, USA” as buses arrived to collect them.
“Of course, in contravention of the rules of quarantine, she’s not wearing a face mask, and she’s talking with a passenger on the adjacent balcony… And you wanted me to get on a bus with her?”
Forty of the US passengers tested positive for the virus and were rushed to hospitals in Japan, said Anthony Fauci, a senior official at the National Institutes for Health. It was not immediately clear if they were already counted among the 355 known cases on the ship.

In China, authorities have placed about 56 million people in Hubei and its capital Wuhan under quarantine, virtually sealing off the province from the rest of the country in an unprecedented effort to contain the virus.
New cases outside the epicentre have been declining for the last thirteen days. There were 115 fresh cases outside the central province — sharply down from nearly 450 a week ago.

Chinese authorities have pointed to the slowing rise in cases as proof their measures are working to stem the spread, even as the death toll climbed to 1,770.
But World Health Organization head Tedros Adhanom Ghebreyesus has warned it is “impossible to predict which direction this epidemic will take”.
And concerns remain about the global transmission, especially on cruise ships which appear to have become especially virulent breeding grounds.

Fears are growing for passengers on the Westerdam cruise ship, who all received a clean bill of health when they disembarked in Cambodia — a staunch ally of Beijing.
One of the passengers was stopped by authorities in Malaysia over the weekend when she was detected with a fever and later diagnosed with the virus. There were more than 2,200 passengers and crew on the ship when it docked in Sihanoukville, many of whom have now dispersed around the globe.

With tourism battered and global supply chains disrupted by the virus, experts are fretting about the toll it could take on a fragile global economy.
IMF chief Kristalina Georgieva said there could be a cut of around 0.1-0.2 percentage points to global growth but stressed there was “still a great deal of uncertainty.”
Japan, one of the hardest-hit countries outside China irrespective of the Diamond Princess, suffered its biggest economic slump in more than five years — even before the coronavirus crisis.
Gross domestic product in the world’s third-top economy shrank an eye-watering 1.6 percent in the three months to December — a much bigger contraction than economists had feared.