Parliament donates Shs. 114m to Ghetto Kids towards payment of their house 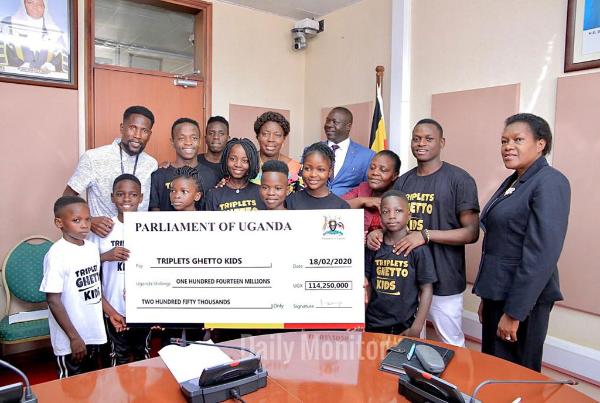 The Speaker of Parliament Rebecca Kadaga has handed Shs. 114 million in cheque to the Triplets Ghetto kids as support from the Parliament of Uganda towards paying off the Groups’ house.

Last year Members of Parliament pledged to contribute Shs. 100m towards the payment of the Groups house and today Kadaga on behalf of Parliament delivered a cheque worth Shs. 114m to the young group popularly known as the Ghetto kids.

The Ghetto kids who had purchased the structure in 2018 were facing eviction over failure to complete their final installment.

During today’s handover ceremony, Kadaga revealed that the Members of Parliament had managed to contribute Shs. 114,250,000 million towards supporting the Ghetto kids adding that Shs. 100million will be directed towards paying the House debt and the Shs.14,250,000 is meant to support the kids in their day to day activities including school fees.

Last year, The Group Manager said that the group was on the verge of losing their house after failing to complete payments by December 2019.

According to Dauda Kavuma, the group manager, they had only paid Shs. 88M on a total of Shs. 220M.

During their fundraising drive, they reached out to the Speaker of Parliament Rebecca Kadaga seeking financial support who has today delivered a contribution of Shs. 114m  that she managed to fundraise from the Members of Parliament.