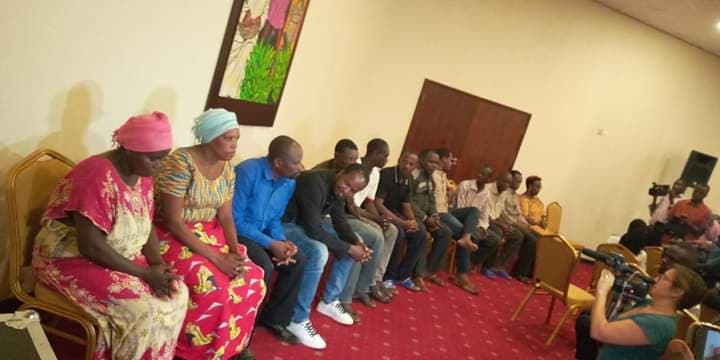 13 Rwandan nationals have been handed over to the Rwandan High Commission in Uganda ahead of the Museveni-Kagame talks scheduled for Friday 21, February at the Katuna border post.

While addressing Journalists at the handover event, Foreign affairs Minister Sam Kuteesa said that the practice of handing over of the Rwandans to their Embassy is aimed at bringing peace in the region and also normalizing the relations between the two countries.

“In order to consolidate the rebuilding of goodwill as envisaged under the Luanda. Arising from these discussions and as a further gesture of goodwill, the government of Uganda decided to release 13 more Rwandan nationals in addition to the nine that were released on 8th January 2020,” he added.

The 13 Rwandans have been classified into four groups that include the first three people who were deported for espionage and security-related offenses in 2019 but came back to Uganda and were arrested, The second was comprised of the spouses of those in category one and the third group had five people who were involved in criminal activities and the Fourth had  One Person who was recently released by the General  Court Martial after they withdrew charges of illegal possession of firearms.

Kuteesa also said that Rwanda has only released two Ugandans.

The release of Rwandans comes just a few days ahead of the Museveni – Kagame meeting at Katuna border that is expected to put an end to the disagreements between the two heads of State and Rwanda will open its doors again.