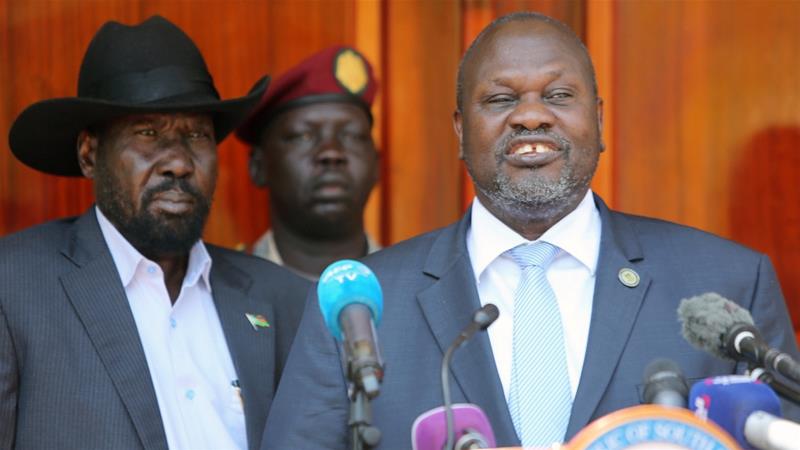 South Sudan rebel leader Riek Machar was sworn-in as first vice president on Saturday, formally rejoining the government in the latest bid to bring peace to a nation ravaged by war. Bitter South Sudan Rivals Salva Kiir and opposition leader Riek Machar made talks last year which have finally produced a new government. It is the third time that bitter foes Machar and President Salva Kiir will attempt to rule together and the pair have many differences yet to iron out as they form the unity government that is a cornerstone of a September 2018 peace deal.

Machar embraced and shook hands with Kiir after being sworn in.The rebel leader returns as first vice president. Four other vice presidents from the government and other opposition groups who will also form part of a bloated government. The rivals started out as president and deputy at independence in 2011 but Kiir sacked Machar in 2013 and later accused him of attempting a coup against him, sparking a  bloody war characterised by ethnic conflict.

The formation of the unity government comes after almost 18 months of bickering as the warring parties moved at snail’s pace to address crucial issues.It was postponed twice by failure to move forward on forming a unified army, carving out state borders and creating a protection force to assure Machar’s security.

Experts had warned against rushing into a new unity government before all the outstanding issues are resolved, saying it could lead to disaster once again. Both Kiir and Machar are former rebel leaders who rose to power during Sudan’s 1983-2005 civil war between north and south — a conflict in which the men also fought each other — before South Sudan won freedom in 2011.

United Nations experts say Kiir and Machar are both responsible for most of the violence committed during the war.