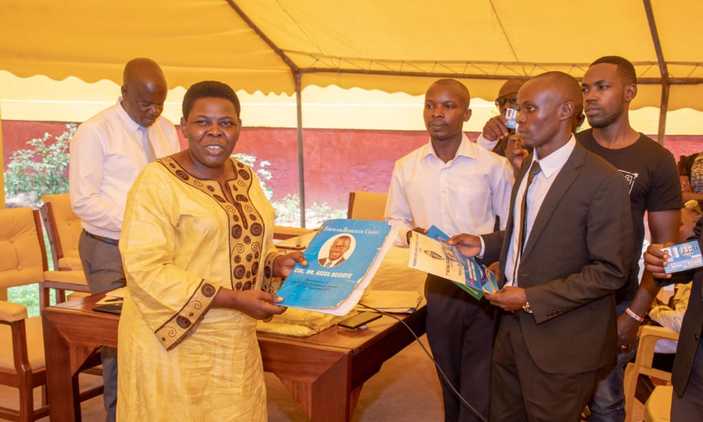 At least 38 youths affiliated to the opposition party of Forum for Democratic Change have crossed over to the ruling National Resistance Movement, NRM in a mini-event presided by Rose Namayanja, the party treasurer.

The raged youths led by the Kalangala district FDC youth chairman, Lawrence Mugumya accused the top party officials of lacking political focus as many had been in closed door contacts with the NRM officials.

While receiving them over the weekend, Namayanja asked them to stick to their decision if they are to have a ‘bright’ political future. She eventually handed over a copy of the party constitution and yellow shirts for each of the new converts.

At the same function, Namayanja reminded them of how she was a staunch member of the Uganda Young Democrats, (UYD) a youth wing of the Democratic Party. As a youth, she chose to dissent from the UYD for NRM after realizing the latter had a ‘brighter’ future.

Lawrence accused the top FDC officials of silently collaborating with the NRM government behind closed doors. He also says they have been deceived and blindfolded for long and yet the NRM party is ‘hospitable’. The youths pledged to scavenge for more opposition leaning youths and lure them into the NRM.

Usually, a year to the occurrence of the general elections, most political parties suffer slight defections of disgruntled members who cross over to other parties. This year alone has seen NRM lose majority of its bigwigs to the rising People Power movement led by Kyadondo East legislator, Hon. Robert Kyagulanyi Ssentamu. NRM MPs like Mbwatekamwa, Theodore Ssekikubo of Lwemiyaga county have already allied with the People Power movement. ‘Go Forward’ proprietor, Mbabazi is also already a guest to the ruling NRM party.