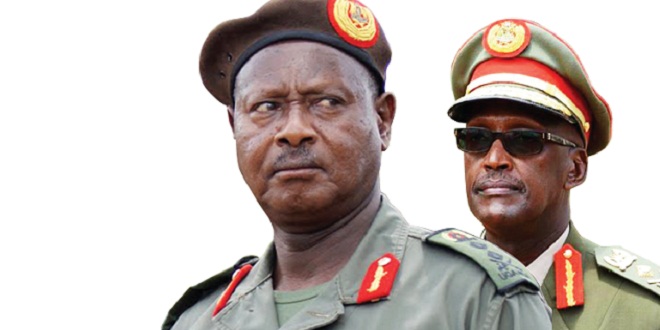 The UPDF has stripped for security minister, Lt. Gen. Henry Tumukunde of all his security detail at both his Kololo and Rukungiri residences.

The withdrawal order was issued last weekend by the UPDF high command after being tipped off by an insider that the former Bush war historical plans to make a political bounce back to presidency.

Tumukunde first initially announced his Kampala Lord mayoral bid last year. Sources however say this was just a diversionary stunt aimed at clearing suspense that he would run for presidency. Reliable sources contend that the army general has for a while embarked on nationwide mobilisation of masses across the country ahead of making a full statement clarifying his ambitions.

It is not the first time Gen. Tumukunde is clashing with his former Bush war colleague, Yoweri Museveni. In 2005, Tumukunde was arrested by the military court martial on the orders of Yoweri Museveni who accused him of bearing treasonous deeds. He was detained amply for some two years before he sought to be pardoned in 2007. The basis of his arrest stemmed from his anti-term limit sentiments which he made public during a cabinet meeting in 2003. He was relieved of all those charges on April 18, 2013 when the court martial resolved to set him free. Two years later in 2015, Tumukunde was promoted to the rank of Lieutenant General and then retired from the UPDF. In 2016, he bounced back to cabinet before being sacked together with long time rival, Gen. Kale Kayihura on 4, March 2018.