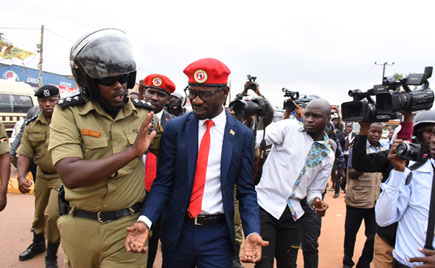 Electoral Commission (EC) boss Justice Simon Byabakama has revealed that the commission is not aware of the issues behind the fresh standoff between Police and Hon Robert Kyagulanyi. Byabakama says they convened with the two parties and agreed on a number of issues between encouraging them to develop good communication and constant interaction.

“As to what issues have arisen, as a commission we are not yet aware and we want to find out,” says Byabakama. He urges Police to clearly come out and state their conditions.

Police yesterday revealed that People Power president Robert Kyagulanyi aka Bobi Wine had not fulfilled the requirements to carry on with consultations. Among the issues is failure to communicate the venues and consultative strategy.

However, People Power pressure group says they fulfilled what was asked for. People power has since written to the Electoral Commission formally sharing with them their proposals and requested them to convene a meeting to harmonize the positions.