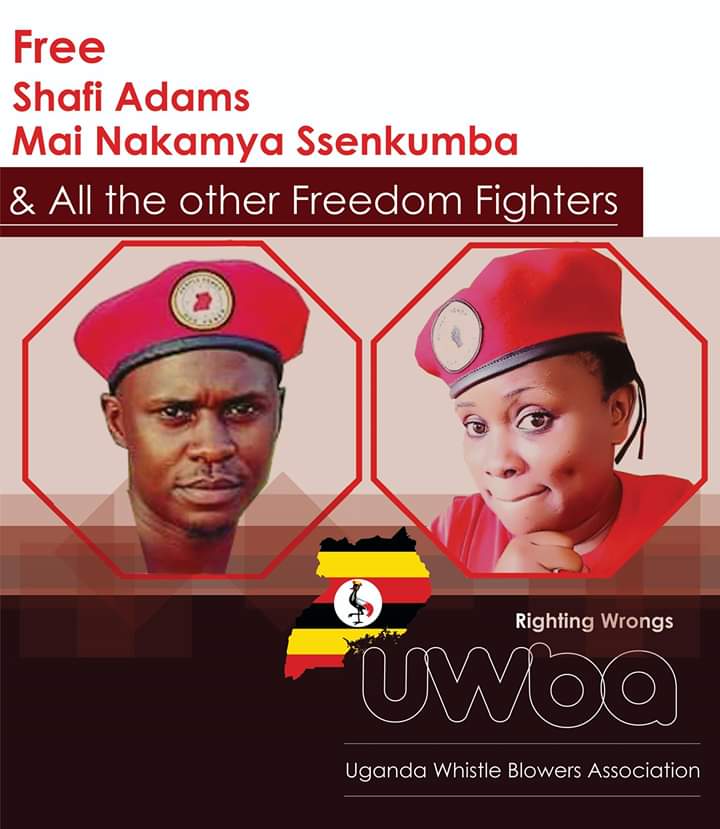 As the police crackdown on Bobi Wine and his People Power supporters intensifies, two more have been arrested in Nsambya over associating with the wave.

Shafi Adams and Nakamya Ssenkumba were arrested at a photoshoot expedition in Nsambya, Makindye division, Kampala. Witnesses say, the duo were donned in their red berets linked to Bobi Wine’s People Power at the time they were busted.

Police has not yet issued any official statement tatement to explain the arrest however, preliminary reports say the duo are to be charged with unlawful assembly contrary to the Public order management act which guarantees that citizens planning to convene must write to the police at least 24 hours prior.

People Power activists have condemned the arbitrary arrest and police hostility on their principal and supporters. Musician, Nubian Li has already lashed out at the regime for instigating hate politics by arresting dissidents. ‘Our comrades were arrested yesterday in Nsambya on a video shoot and now police is charging them with unlawful assembly! I guess they want to fill their new prison in Wakiso,’ Nubian wrote on his Facebook.

Bobi Wine’s consultations are apparently being blocked despite clearance from the electoral commission on top of his supporters being maimed by men in uniform. The latest victim, Ritah Nabukenya is to be laid to rest after a police patrol deliberately knocked her in Nakawa, Kampala as she advanced to Buganda road to attend a court session.

It should be recalled that a number of government officials including heads of armed forces have been quoted taking oaths of quashing People Power supporters. Yesterday on our official Facebook page, we broadcast a footage showing police officers beating up a People Power supporter in their custody. Similarly, the People Power western coordinator, Saasi Marvin authoritatively stated on his social media that while in Mulago yesterday, some doctors (civil servants) were quoted saying they cannot work on People Power patients. The case of John Bosco Kibalama is another fragile example of the impeding political persecutions in the country.

Efforts to trace Mai Nakamya Ssenkumba and Shafi Adams turned futile as Kabalagala police declined to allow our sources to meet them.

Bobi Wine on the arrest

‘As we still mourn our comrade Nabukenya who was murdered by police yesterday, 10 of our friends with whom we have been working on a music project were rounded up by police including the video directors and cameramen,’ says Bobi in a post