Makerere students demo kicks off in the night 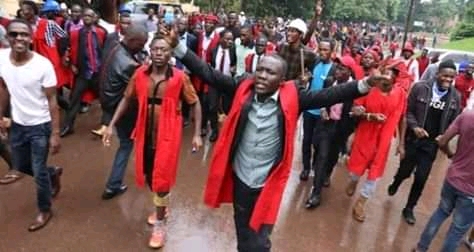 On Friday of February 28, Makerere University students spent a great deal of their night contesting the anticipated electoral reforms and the delayed polling process.

The students sanctioned assemblies in each of the halls of residence from where they mobilised and took to the streets to challenge Nawangwe’s efforts to disenfranchise them. The peaceful protests turned rowdy when the police attempted to break into the halls and arrest student leaders. Consequently, live bullets and teargas were fired at 23:00 hours (E.A.T) as police quelled the protest from spreading beyond the university premises.

Elsewhere in the neighbouring Kikoni community, the students set bonfires in the roads on top of creating barriers to stagnate traffic flow. However, no arrests were made in the night as protesters smartly evaded police.

When contacted to make his say, the former guild president, Kateregga Julius supported the students’ idea of challenging council decision to delay the elections. He stresses that council is deliberately trying to block student activists like Musiri David and Obed Obed Derrick from running for the elective guild seat as the duo can give them ‘headache’ if they win. Kateregga took to his Facebook account to give his take on the matter. He advised council to bow down and let students hold their elections.

Many candidates we spoke to maintain their disappointment with the university administration for failing to pave space for students’ elections. People Power’s Harris Akampurira decries the expenses associated with the delayed polling. ‘We are spending too much money on campaigns and campaign materials yet we have no clear election road map,’ he said. ‘By Monday if everything is not yet settled, we may be forced to speak the language they understand,’ he adds. The students electoral commission was not sworn in on Friday, 28 as the university Dean’s office had communicated in a letter.

Elsewhere in Kyambogo, the campaigns are smoothly ongoing with People Power’s Mbaziira John taking the lead. Their polling is to take place on March, 10. The Makerere students guild constitution stipulates that the elections must always be held in the first ten days of semester two of every academic year.