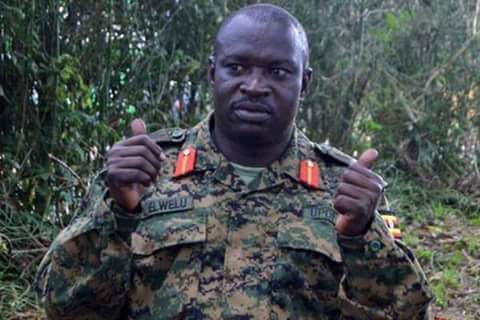 Privy sources from Bombo army barracks reveal that Maj. Gen. Peter Elwelu is disorderly at the moment. Elwelu about a fortnight back appeared in the media and made controversial comments on the looming poverty in the country. He was quoted claiming that the poor deserved to be incarcerated if poverty is to be eradicated. Elwelu told the media that there was no reason for any Ugandan to cry about poverty. He concluded by asking authorities to reprimand any Ugandan dwelling in poverty. These controversial remarks sparked an ire all over Uganda as people castigated him for being selfish and ‘inhumane’. Little did they know that the UPDF strongman was not in his right senses when he made those remarks.

According to ” the capital times” Elwelu’s mental illness is said to have sparked about two weeks back according to a family member . She says he was always anxious and depressed at the same time. ‘He keeps shouting alone in office. Loses his mind and wants to shoot whoever annoys him,’ says Linda. (not real name) “He begun with a strange headache that eventually saw him shout in the office. We contacted special doctors to assess his situation but all in vain,” she adds.

Elwelu joins the list of state mercenaries to suffer mental distress. Similarly, the famous Gilbert Arinaitwe Bwana who roughed up Dr. Besigye at the Mulago roundabout in the 2011 walk to work protests suffered the same mental derailment and sought divine assistance from religious leaders. He currently operates a local born again church in Makindye.

Psychologists attribute Elwelu’s situation to the 2016 November massacres in Kasese which left over 200 women and children lifeless. They say the horrendous images of the deceased must be resurfacing in his memories leading to mental problems. “When a man commits a grave offence like murder especially large scale murder, the blood of his victims cannot wash off his mind. In most cases, one can commit suicide in pursuit of relief,” says Akatukunda, a specialist in mental health.