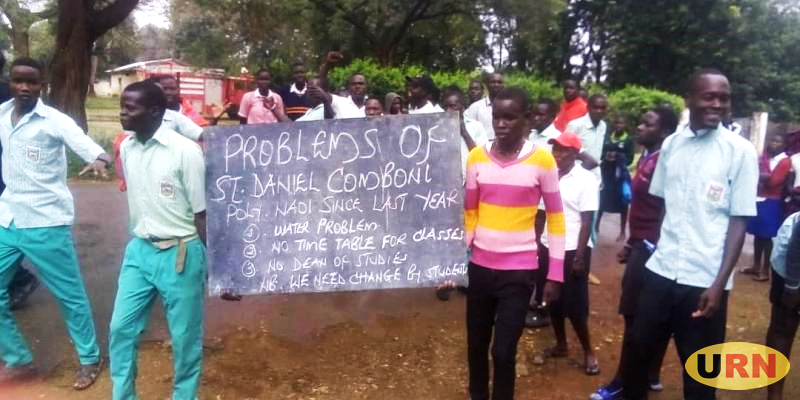 Students of St. Daniel Comboni Polytechnic Institute in Moroto have staged a peaceful demonstration protesting the lack of water at the institute.

On Tuesday, the angry students walked from the school campus to the district headquarters.

Since last year, the school has been lacking reliable water, forcing the students to fetch water from a dirty stream.

Mary Loma, a year one student, expressed fears of an outbreak of diseases due to consumption of contaminated water.

“We fetch water from a stream. This is what is used for cooking, washing and sometimes drinking. We try filtering it before taking though,” said Loma in Ngakarimojong during the peaceful demonstration.

Another student, Emmanuel Lokwi said that the water crisis has affected learning at the institute because many students are falling sick and can’t afford to pay for their treatment bills.

The lack of water has forced students to forego hygienic practices such as hand-washing after visiting the latrine while others have allegedly abandoned the waterborne toilets in favour of open defecation in the nearby bushes.

Paul Okuta, the District Education Officer Moroto said the concerns raised by the students are genuine. He said that the school administration will be compelled to act.

The Principal of St. Daniel Comboni Technical Institute, Fr. Jude Thaddeus Kiggala attributed the water crisis to the break down of the water pump.

St. Daniel Comboni is a privately-owned technical institute founded by Moroto Catholic Diocese. It has an enrollment of about 200 students.