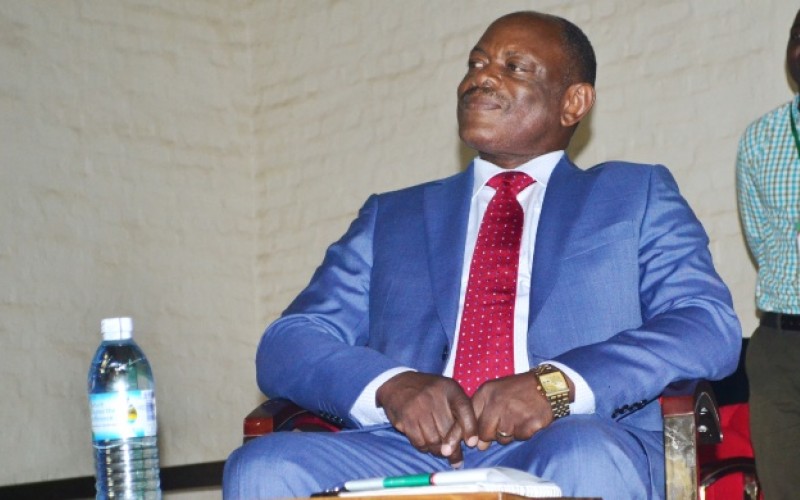 Work has slowed down at Makerere University Printery following the sacking of 12 technical staff and manager. There was little activity taking place in the Printery, which is found in the basement of the Main Building this morning.

The sacking of 12 out of the 20 staff in the Printery cripples its capacity further, given its established structure of 31 staff.  URN has since established the affected workers were laid off by the Vice Chancellor, Prof. Barnabas Nawangwe at the end of their contracts.

Some of the staff told URN that they woke up on Tuesday up to the news that they had been sacked. Police Officers attached to the University were called in to ensure the staff vacate with immediate effect.  The 12 employees have been working on contracts, which would be renewed over the years.

The sacked staff include Annet Nabwire and Josephine Adokorach, both working in the Book Bindery Section, and their section head, Harriet Nabitaka.  Others are Aggrey Ndikimukka, a Machine Operator, Stanley Makanga, the operator of Mini Binder and Cutting Machines, Francis Buwande, an operator of the Mini Offset Printing Machine.

URN has seen a March 3, 2020 correspondence from the Vice Chancellor to Annet Nabwire indicating that the University Appointments Board took a decision to suspend award of contracts until further notice.  He informed the affected staff that their contracts wouldn’t be renewed and asked them to immediately vacate the Printery premises.

“Please make arrangements to handover all property that belongs to Makerere University Printery. Since your contract expired you should leave the Printery premises immediately,” Professor Nawangwe’s letter reads in part.

At its 148th meeting held on December 20th 2019, Makerere University Council resolved that all short-term or stopgap contracts that expire were not to be renewed.  The Appointments Board however permitted the Vice Chancellor to consider urgent matters where he could extend such contracts for a maximum of three months not exceeding March 31st 2020.

The decision, sources on Council say was based on the findings of the 2019 Human Resources Audit, spearheaded by Senior Advocate, Kiryowa Kiwanuka. The audit report had discovered that the Bruce Kabaasa Balaba-led Appointments Board had recruited staff without a budget creating a wage bill deficit of Shillings 14.619 Billion.

Insiders say the implementation of the Appointments Decision is likely to cripple the Printery operations as it has been the only remaining functional commercial service unit of the University.  Although the Appointments Board had stopped renewal of the contracts of staff on stopgap, URN understands that the University Printery was not among the Units to be affected.

This is because it has six (6) of its staff permanently employed and on the University payroll. The rest, 13 of them were paid from the revenue generated by the entity. Makerere University Printery was established in 1962 by management as a service unit to support the University undertake printing works.

It has over the years attained its established mandate and has been undertaking printing of various materials including Examination Answer Booklets, Graduation Materials for both Makerere University and Makerere University Business School (MUBS), Certificates, University Press Publications, Students Ballot papers, Stationary requirements and internship training.

This has been in addition to printing Transcripts, Staff publications, Journals, Books, Manuscripts, and Public Universities Joint Admissions Forms (PUJAB Forms). It has also been offering Secure Printing Services of Examination scripts, booklets as well as Degree and Diploma Certificates for Gulu University.  URN has established that the Printery is likely to be handed over to the Makerere University Holdings Ltd (Mak holdings), the investment arm of the university.

Mak holdings took over the University Guest House in 2015. However, reports from the university accounts section show it has never remitted funds to the University to date despite not paying utility bills.