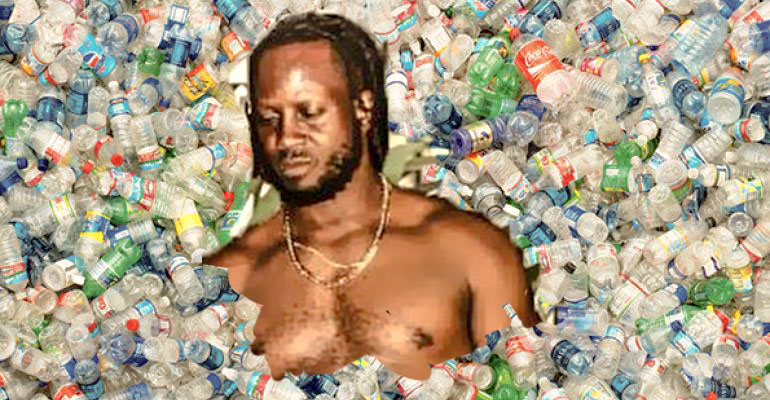 Singer Big Size Bebe Cool has yet again faced the wrath of fans at Cindy’s record-breaking Boom Party Concert at Lugogo Cricket Oval. Angry fans have pelted him with bottles full of Urine in a bid to chase him off the stage.

However, the defiant Yellow Bus passenger was not shaken, he continued to perform like nothing was happening to him.

This is the second time the singer is facing shame at the same venue. He was not introduced onto the stage as other artists during the concert as the organisers had anticipated that this would happen.

However this didn’t save the Bogolakko singer who came on stage immediately after  B2C trio , no sooner had the revellers heard Big sizes song coming through B2C`S performance than they started hurling bottles on stage to stop his performance before he could even set foot on stage.

The defiant Bebe cool continued on stage putting his life at risk as bottles came raining on stage. Some concert-goers claimed there was a fluid that they couldn’t recognize but had a resemblance of urine in the bottles. The artist had to juggle dodging bottles like a scene in the movie matrix, dancing apart together and singing.

READ:Ronald Mayinja forced to put His Roma Hotel on sale to pay off “Peace for all initiative” debts

He shares the fate of other pro-NRM musicians like Big Eye, Catherine Kusasira and Full Figure who have been pelted bottles on stage for supporting President Museveni.

The incidents in Lugogo are prompting artists like Eddy Kenzo who has a concert in April and Ronald Mayinja to make tough decisions of canceling the events or beefing up security in order to avoid what happened at Lugogo.

READ: Comedian Salvador on Verge of Going To Jail Over Shs500millions.