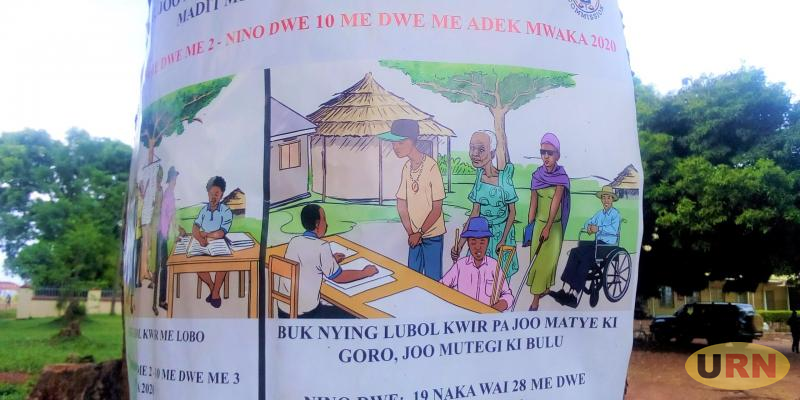 The display of National Voters’ Register in several polling stations in Omoro district has been marred by missing and pre-ticked voters’ names.

The nationwide display exercise by the Electoral Commission (EC) started on February 19, ending on Tuesday, March 10, 2020. The display has been EC’s last key engagement with the public before 2021 general polls following the update of the National Voters’ Register throughout the country.

Among others, the exercise was aimed at cleaning up the voters’ record by canceling the deceased or the underage persons who could have been wrongly registered and eliminating voters whose details may have appeared twice.

Though URN could not establish the exact number of registered voters in the district, but the EC has deployed 178 Display Officers across 178 polling stations in 470 villages, 71 parishes in 15 sub-counties.

Dozens of residents who registered as voters expressed dismay after finding their names missing in the voters’ register while a significant number disclosed that they discovered their names were already ticked without their consent.

One such case scenario involved Pat Robert Larubi, a resident of Katikati A, Alokolum Parish in Koch Ongako Sub-County. Larubi divulged that he registered with his spouse on the same day but his name was missing as opposed to his wife’s.

Larubi says that the anomaly has made him skeptical of the ability of the EC to conduct a free and fair election in 2021 given the several unresolved queries being raised by the voters.

Gloria Auma, another registered voter reveals that she found her name already ticked at her polling station adding that a Display Officer told her that they have been encouraging voters to tick names of persons they know in the register.

Denis Obong, the District Registrar of Omoro confirmed receiving only two cases of persons complaining of their missing names in the voters’ register but denied incidences of pre-ticked names.

All complaints arising from the Display Exercise of the National Voters Register shall be addressed to the Returning Officers of the respective Electoral Districts and shall be handled per Article 61(1)(f) of the Constitution of the Republic of Uganda and Section 15 of the Electoral Commission Act, Cap 140.