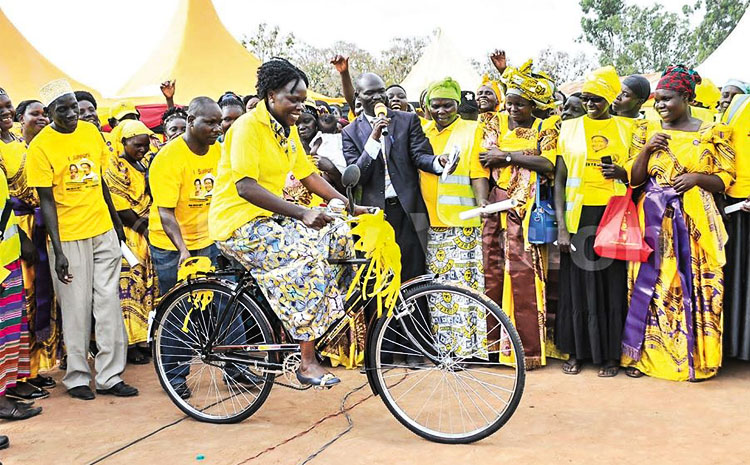 Local Council Chairpersons in Koboko have threatened to sell the NRM bicycles that were donated to them by their area Mp Evelyn Anite.

The NRM Bicycles, whose cost and the number have not yet been established, were handed over to LC and Religious leaders by Anite as part of Accountability and thanksgiving from NRM.

According to Anite, the bicycles are meant to facilitate the Local council chairpersons as they mobilize votes for Museveni and the NRM in 2021.

After receiving the NRM Bicycles, Mr. Abuyi Umar the LC1 chairperson of Alimakodra Cell said that he was shocked and surprised at how after 32 years in Power the NRM is still buying bicycles yet this is an era of Motorcycles.

“If I was not given the bicycles, I would not mind because there is no need for bicycle use in Alimakodra. I have three motorcycles and handed over one to my executives to help the community.”

Following the disappointment, another Local Council Chairperson Abuyi revealed that he is planning on selling the bicycle in exchange for motorcycle tyles whereas another chairperson only identified as Ayume said he would sell the bicycle to acquire iron sheets for his building.

The Bicycles were part of the promises Mr. Museveni and Anite made during the 2016 Campaigns.