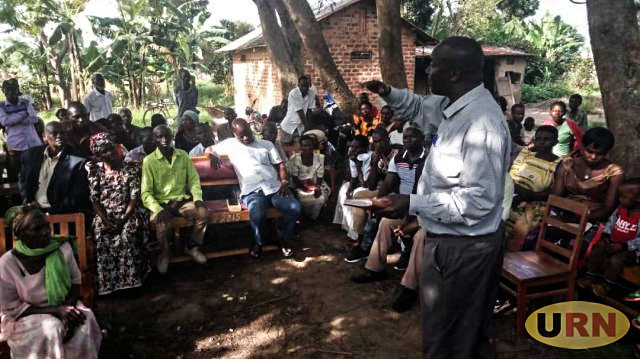 Magidi Mubiru, the village chairperson for Kasasa cell A in Mityebiri parish, Kyotera district has been accused of extorting money from persons affected by the expansion of the Mutukula road project.

Government with funding from the African Development Bank plans to undertake major rehabilitation and expansion of Masaka-Mutukula road, which requires displacement of people leaving within the road proximity to pave way for the project.

However, during the public consultation meeting convened at Kasasa sub-county headquarters, residents have accused Mubiru of fleecing them of money as they seek verification and introduction letters.

Simon Peter Kanyike, one of the affected persons in Kasaka trading centre, accuses Mubiru of charging between Shillings 20,000 to 100,000 for introduction letters that required by the project evaluation teams.

Kanyike alleges that the chairperson is also conditioning some of the affected persons to give him advances on part of their expected compensation fees before he can sign on their introduction forms.

Laurencia Nakanwagi, one of the affected people bemoans that the chairperson delayed her compensation file until she raised a bribe of shillings 100,000 he had demanded before stamping her introduction letter and property survey forms.

Moses Kalumba, another project affected person has also accused the chairperson of taking advantage of semi-illiterate people in the area to fleece them money in the guise for linking them to the project evaluation and coordination teams.

Although Mubiru, did not attend the meeting, Major David Matovu, the Kyotera Resident District Commissioner through the village council executive committee, directly instructed that he reports to his office for questioning.

When contacted for a comment Mubiru has denied the allegation labelled against him describing them as malicious.