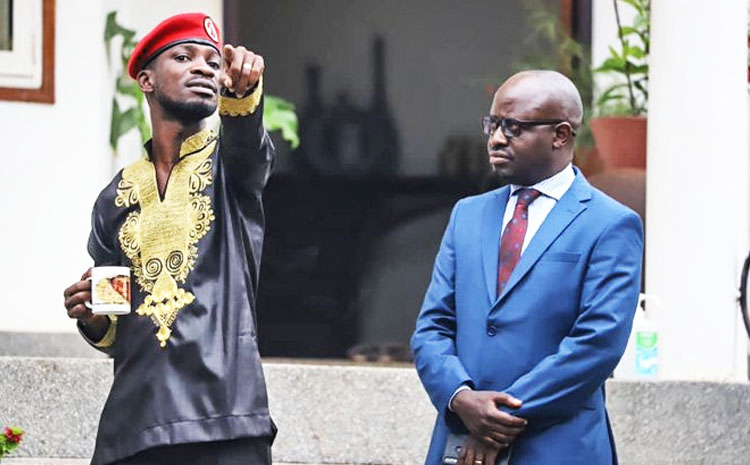 Kyadondo East legislator Robert Kyagulanyi Ssentamu aka Bobi Wine has said that he is in no position to talk with the first son because he is not a free man in his own Country and Security agencies led by his father keep inflicting Injustices upon People in the Opposition.

Bobi Wine who was reacting to Muhoozi’s tweet about wanting to meet him added that there was nothing to talk about between the two of them as long as Museveni gags Bobi Wine and other Opposition members from expressing themselves.

“What is there for me to talk with Muhoozi when his father is stepping on my neck? It is important to have good ground for conversation. Let them stop killing Ugandans and stepping on my neck. Nelson Mandela said, only free men can negotiate.” said Bobi Wine

During the same interview, Kyagulanyi narrated how he was almost killed at the hands of the Army during the Arua by-election adding that he is not ready to talk to his Oppressors.

Bobi Wine also noted that while he is aware of Vote rigging, he is convinced that the People Power Movement can win the forthcoming 2021 elections with the majority votes.

“I am convinced we can win this election. I know it will not be free and fair but we are the majority. We are reaching millions of people, that is why the regime is panicking,” Kyagulanyi said.

Bobi Wine applauded Lt. Gen. Henry Tumukunde for joining struggle to free Uganda adding that even if they are only a thousand voters, what matters is that there is a collective responsibility to have a free Uganda.

Kyagulanyi also noted that as a generation, they have been ready for a change for the last 35 years and 2021 is their chance to take overpower.

When asked whether he would be able to lead the security of this Country, Bobi Wine said that the Country is not supposed to be led by one individual but rather institutions adding that the Law stipulates it clearly that military institutions shall submit to civilian authority and as Per the 5 pillars of the People Power Movement they intend to instill the Rule of Law.

“Our mission as People Power was to awaken Ugandans, now we are preparing them for the final run, taking over this country as Ugandans.”