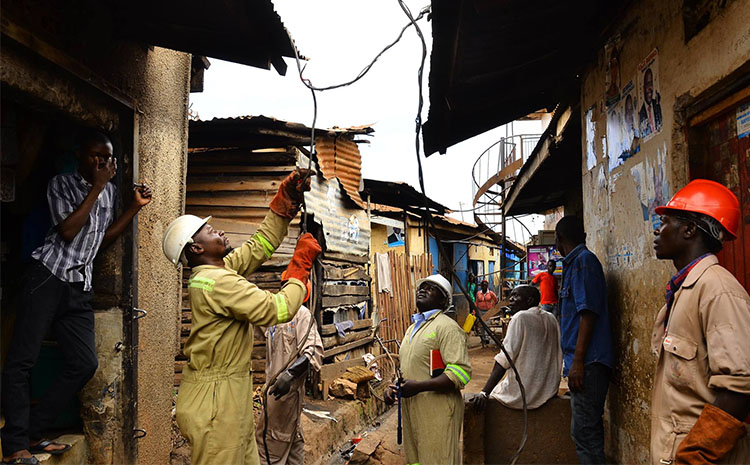 More than 50 residents of Kikyusa and Wobulenzi town councils in Luweero district are accusing technicians sub contracted by UMEME Limited of extortion. The two councils have been experiencing power outages and low voltage over the past few days.

The power outages have taken a huge toll on businesses such as saloons, welding workshops, stationery, hotels and individual homes among others. Sulaiman Ssebuliba, a businessman in Katwe zone in Kikyusa town, says the technicians sub contracted by UMEME limited have now resorted to soliciting money from power users to move them to stable power lines.

According to Ssebuliba, since people are desperate for stable power, they are paying between Shillings 20,000-100,000 to get on stable power lines. He however, says that the technicians return a few days after fixing the old lines and transfer the power consumers to the same problematic lines.

Ivan Mutyaba, a barber in Kikyusa town council claims that he had to pay Shillings 60,000 to be migrated to another line after spending four days without power and losing clients.

Other power consumers suspect that the technicians deliberately mess up the power supply and switch lines with intentions of extorting money from them. bCharles Wafula, a Shop keeper in Kikyusa town, says recently UMEME embarked on migrating all people to YAKA meters but many of them are faulty, adding that he paid Shillings 40,000 to fix the problem.

The affected residents have petitioned Luweero Resident District Commissioner, Phoebe Namulindwa demanding that she investigates extortion by the technicians and arrest the suspects. Namulindwa promised to reach out to the UMEME Manager in Bombo for explanation and investigation over the matter.

The Umeme Spokesperson, Stephen Illungole condemned the alleged extortion but said the case was difficult to investigate unless residents name the suspects.

He explained that UMEME stopped cash payments to any of its staff in 2015 and advised the public to stop making such payment since it is illegal.

He also asked the public to report any power outage to their nearby branch for redress rather resorting to technicians, some of whom are unknown to UMEME.