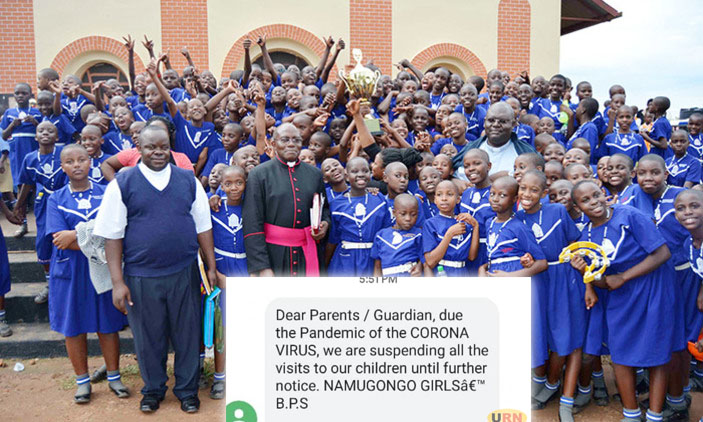 “We regret to inform you that, after thorough consultations, our VISTING DAY due this Saturday is hereby postponed until further notice due to the CORONAVIRUS PANDEMIC. We regret the inconvenience caused,” reads a text message sent by Kabojja to parents.

“Dear Parent/Guardian,due the Pandemic of CORONA VIRUS, we are suspending all the visits to our children until further notice,” reads another message from Namugongo Girl’s Primary School. Namugongo Girls Primary School and Mugwanya Preparatory School Kabojja are not the only ones that have taken drastic measures to deal with the pandemic.

Other schools such as Quality Primary School and British School of Kampala are advising parents to buy personal hand sanitizer bottles and avail them to their children as a preventive measure. British School has gone ahead to cancel an even overseas trip to France and has stopped learners and staff from shaking hands and hugging each other.

Namilyango Boys Junior School has resorted to buying surgical masks and distributed them to pupils as a means of keeping them safe.   While health experts are calling upon people to avoid large gatherings, stop shaking hands and hugging, education and health officials that URN spoke to say that some of the precautionary measures that schools have set up are exaggerated.

Alex Kakooza, the Permanent Secretary Ministry of Education and Sports, says schools shouldn’t be cancelling visitation weekends. He says the practice is news to the Education Ministry. “We have sent circulars to schools detailing what measures should be put in effect to handle coronavirus at that level. We have not told them to stop parents from visiting,” Kakooza said.

Some of the measures recommended by the education ministry include washing hands regularly using hand sanitisers or soap and water, staying one meter away from people with cough and flu. The ministry has also asked learners to avoid touching their faces and advised people with flu and cough to wear facial masks. The guidelines also require people with fevers or breathing difficulty to seek medical help.

Yonas T. Woldermariam, the WHO Country Representative, says extreme reactions like the ones at Namilyango Junior and Kampala Quality have led to global shortages of Personal Protective Equipment-PPE. He says people without symptoms of the disease don’t need PPE material and using would it would deny health workers who need them such materials.

Dr. Misaki Wayengera, a Virologist and Immunologist at Mulago National Referral Hospital, who has carried out research on viral diseases, says the call for people to carry out hand washing right now is a waste of resources. He says since no case of COVID 19 has been reported in the country, the preventive method being used is tantamount to wastage.

He says hasty reactions from different officers can throw the entire country into panic.

In addition to over preparedness, Dr. Woldermariam, says the picture in the country is worrying because there are many myths circulating about the disease, which is likely to mislead some people. He says people need more information because myths like African people are not dying of the disease or the mass usage of mask by people is likely to do more harm.

A parent that spoke to URN said the decisions being taken by schools are going to hurt the children that they seem to be interested in protecting. Mary Rose Atim, a parent at Namugongo primary school, says the message from the school is not realistic.

“How do they expect us to see our children or check up on them? In other public spaces measures have been set up to guide such functions. On news I saw the Minister of Health, saying football matches haven’t been cancelled. If people are not cancelling football matches, why is the school stopping us from seeing out children. This is too much,”Atim said.

The World Health Organization has declared COVID 19 a global pandemic due to the increasing number of infected persons. Globally, over 120,000 people are infected with the disease.