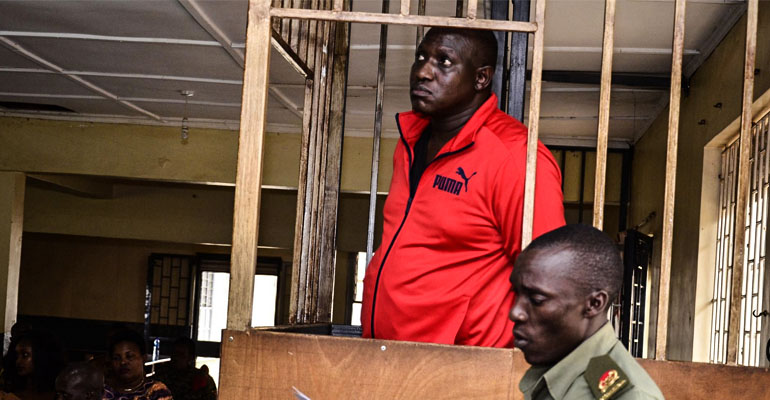 Army prosecutors allege that Buchanan, a resident of Buziga a Kampala Suburb was found in unlawful possession of a pistol on August 16, 2019, which is ordinarily a monopoly of the Defense Forces.  It was also alleged that, Buchanan who was initially picked up for allegedly conning several foreigners in fake gold deals, was found in illegal possession of 18 rounds of 9mm caliber live ammunition.

However, Buchanan through his lawyers led Dr. David Mushabe filed an application in the High Court seeking to block his trial in Military Court, saying the court lacks jurisdiction to try him.  He also argued that the Military court is intended to ensure operational efficiency and discipline of militants and thus lacks powers to try criminal offenses.

However, the Army through the Judge Advocate, Col. Richard Tukacungurwa opposed the application, saying the Court Martial has powers to try him since as a civilian, he was found in possession of property that is a monopoly of the Defense forces and is subject to the UPDF Act.

On Friday, Justice Musa Ssekaana dismissed Buchanan’s application with costs on grounds that it was wrongly filed before the Civil Division of High Court since the applicant was seeking to challenge the criminal exercise of power or jurisdiction.

This isn’t the first application seeking to block a trial in the court Martial Justice Ssekaana is dismissing. In 2018, he dismissed an application by Former Bubulo West Member of Parliament, Tonny Nsubuga Kipoi in which he sought to block his trial in the military court for allegedly plotting to overthrow the legitimate Government of Uganda.