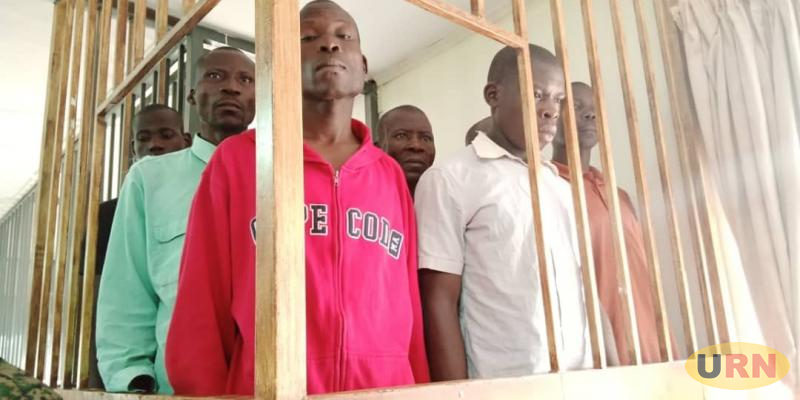 Mugoya Biasaali, a supervisor from SGA security has told the general court martial that he single handedly killed Bugiri Imam, Sheikh Masood Mutumba. He was appearing before the Makindye based General Court Martial Chaired by Lt. General, Andrew Gutting together with his co-accused.

Sheikh Mutumba was gunned down on February 14th 2020 at Lwemba Trading Center in Bugiri District. Shortly after his arrest last week, Biasaali before the General Court martial together with his co-accused where he confessed to the murder, saying he shot the deceased out of vengeance. Biasaali didn’t explain what caused the vengeance against the sheikh and only said the deceased caused him too much pain.

His co-accused pleaded not guilty. This afternoon, the Army Prosecutor, Lt. Col. Raphael Mugisha read for Biasaali the brief facts on the case, saying that he had connived with his co-accused to bump off Sheikh Mutumba. However, Biasaali couldn’t have any of this.  Speaking in Lusoga, Biasaali confirmed that he committed the crime but denied being helped any one.

“I want to reaffirm that I killed the Sheikh alone and I didn’t have anyone else”, said Biasaali angrily.  It is at this point that the judge advocate Lt. Col. Richard Tucacungurwa intervened and advised the seven member panel of the military court that when someone disputes the facts of the case, court should enter the plea of not guilty.

The army prosecutor maintained that although Biasaali could have shot the deceased alone, he must have received help since the killer gun Registration number UG POL 13283692 belongs to Uganda police and not a private security firm. General court adjourned the court to March 31st, 2020 for the hearing to commence.

Sheikh Mutumba’s brother, Arajab Kanabura welcomed the court decision, saying Biasaali has accomplices, saying they were seen in a meeting prior to the incident. Last week, a ten-year-old who witnessed the shooting outside Mutumba’s home told URN that he had accompanied the deceased to buy Sugar when he saw a stranger trailing them on foot.

The child reportedly thought the stranger was a visitor since he walked a few steps towards them. He explained that the suspect who was wearing a black hood later took cover behind a tree in their compound before shooting the cleric in the head. Sheikh Mutumba was answering a phone call when he was killed.