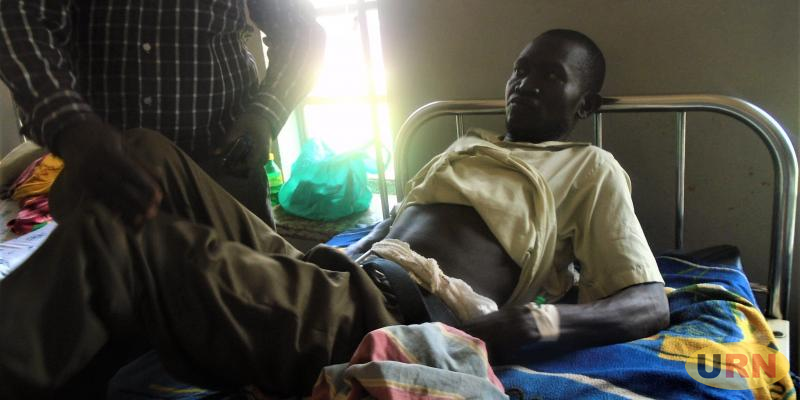 A 38-year-old man is receiving treatment from Kitgum General Hospital after being shot by Uganda People’s Defense Forces [UPDF] soldiers during a clash with armed Karamojong cattle rustlers.

Marshall Acire, a livestock farmer in Apimoto village in Kiteng Parish, Orom Sub County in Kitgum district was shot on his left thigh and lower stomach on Saturday at around 6 pm from his home.

It’s reported that UPDF soldiers had responded to an emergency call after armed Karamojong cattle rustlers invaded the neighbouring village of Lakongera and looted unspecified numbers of cattle.

Speaking to Uganda Radio Network from his hospital bed on Monday, Acire says he had just returned two of his three cattle home from grazing in the bush when he felt a sharp pain on his leg and belly.

Acire says as he attempted to ascertain what could have happened to him, he saw blood dripping from his left thigh and stomach.

“I was in my compound when suddenly I felt like something had pierced my stomach when I looked down, blood was oozing. I felt down but some soldiers came and rescued me from my compound while gunshots were still being fired,” He says.

Acire was first rushed to Orom Health Center III before being transferred to Kitgum General Hospital surgical ward due to his severe injuries.

Acire, however, says he can’t tell whether he was shot by the cattle rustlers or UPDF soldiers. He called on the district security officials to conduct an investigation into the shoot out and also strengthen the deployment of soldiers to avert intrusion of Karimojong rustlers.

He says victim sustained soft tissue injury which didn’t affect the bone or any internal organ adding that he is out of danger but under close monitoring.

“He has a soft tissue injury, this doesn’t involve the bone or internal organ, we are still monitoring him to ensure that he is completely out of danger,” He says.

The Kitgum Resident District Commissioner William Komakech says Acire was mistakenly shot by UPDF soldiers who thought he was one of the cattle rustlers who invaded the area.

“It was already dark and this victim happened to have passed through an ambush laid by UPDF soldiers frequently used by Karimojong rustlers. The soldiers shot him but later rescued him after realizing he was a civilian,” Komakech told URN, contradicting Acire statement that he was shot from his home.

Komakech, however, notes that the district security committee is investigating the shooting and will render necessary help to the victim.

Despite heightened surveillance, the security team in the district have put in place recently to curb the influx of Karamojong rustlers, vast porous border points of the district with Karamoja region is believed to have greatly facilitated their entry. This has also been coupled with inadequate security personnel on the ground.

Last month, the army seized an AK47 assault rifle from Karamojong rustlers in a shootout a short distance inside Kotido district where the rustlers had been followed after the looted 13 cattle from Orom Sub County.

At least some 26 cattle have been looted from Agago district in the villages of Kabala Manwoko and Kabala Aleda in just one week according to local leaders.