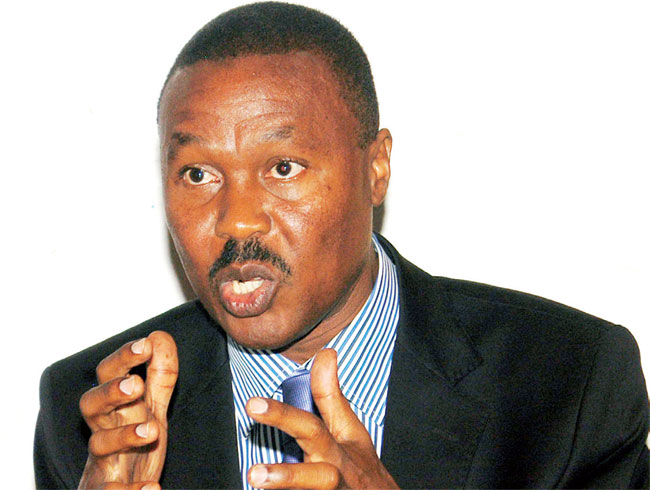 Maj. General Mugisha Muntu says he has dedicated all his energies to create a credible alternative political force, which will deliver democratic governance in Uganda.

The former Army Commander and brain behind the opposition Alliance for National Transformation-ANT says people want change but the challenge is credible leadership.

Ever since he quit the Forum for Democratic Change (FDC) party Muntu says he has been doing underground mobilisation to ensure he has support from the grassroots.

He argues that he intends to recruit at least ten people per village to ensure he has a formidable group, which would challenge Museveni.

According to Muntu, during his mobilisation, he has had challenges of some people who are impatient with his approach and method of work.

“We are speaking to them (people across the country) to ensure they get an understanding of what we are doing. There are two things we want to do. One is building structures and come and make a change. We are also asking ourselves for instance, why is it that everyone who gets into government doesn’t want to leave?” Muntu wonders.

He says whereas there are all signs that government is changing, it is not only enough to simply change faces when Ugandans are not fully prepared to embrace the desired change.

“As far as I am concerned, this government is already over. Change must happen. You can see all the signals. In 1970 I was in P.7 and I would hear them (my parents) discussing without the confidence of how the government was slipping off,” says Muntu.

According to Muntu, ANT is looking for people who will once be convinced and mobilized to be the core of their organisation. He adds this will help in their election.

“That is why we are using this system so that by May, we shall have a start-up. We are bothered by two things; Capturing the power and managing it. Blacks want things for now,” Gen. Muntu says.

He argues that there are natural laws that all Ugandans must understand. He uses the analogy of plants citing that whatever you sow is what you reap. “If you want a sweet orange, you must plant its seed. If you plant lemon fruit, you can’t expect to harvest a sweet orange. That is not possible.”

According to him, if Ugandans want democracy, and or justice and fairness, they must start with themselves, identifying the best way they want to be governed. “Who we are is what we will give. These are things we must concentrate on. If a country is growing well, we shall be all better. We have to be the solution,” General Muntu observes.

Muntu says Uganda needs proper governance systems, equity, justice and a country that works for all. He says there are many people in Uganda with the capacity to work towards such a Uganda.

He says they believe that by the time they reach the mass mobilization level, they will be having leaders at all levels and with established channels of communication.

Muntu left FDC after he clashed with the party’s defiance strategy of challenging the status quo. He argues that whereas has no problem with defiance he is not ready to concentrate on it.

General Mugisha Muntu urges Ugandans to their change in mindset towards leadership. He says it is time to build for the future and for something that will stand a test of time.

“When we captured this country, people believed in us a lot. But look at what has happened. Let’s go to the villages, people want to change. Even people of NRM, are looking for a change. People are standing for political positions on NRM ticket not necessarily because they support it but because they fear,” he says.

Godber Tumushabe, an Associate Director at the Great Lakes Institute for Strategic Studies believes General Muntu’s ANT will become a stabilizing factor in the opposition in Uganda.

“You don’t need a rally to change this country. I think ANT is on the right trajectory. In the context of this discussion, my view is that this country is at a crossroads. It has been at crossroads for a very long time. We have an opportunity now to have a formation like ANT. I think that the opportunity that ANT brings out is the created a landscape where you can come in and make a contribution,” Tumushabe says.

He discloses that he in 1996, campaigned for President Museveni at Makerere University against the Ssemwogerere alliance.

“At the peak of the campaigns, we met in Luweero with a delegation from Eastern Uganda. I disagreed with him immediately after elections. The first decision he did on his swearing-in was to increase cabinet. I was already convinced that Museveni was going to change the constitution to remove the term limits,” Godber Tumushabe adds.

Tumushabe says he likes consistency and honesty which he says is a very rare quality in this country. “…and general Muntu has that,” he observes.