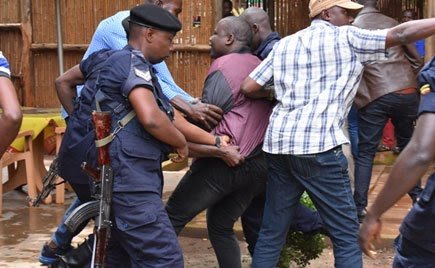 Mukasa largely known by his code name ‘Bajjo’ today, Monday 15 stormed Buganda road court premises to lash out his dissatisfaction with the Uganda judiciary. Armed with just his mattress, Bajjo had even vowed to sleep at the court premises should he be denied his refund. A disgruntled Bajjo explained to the available journalists that court had for the past months took his pleas for granted. He further accused some of the court clerks of trying to solicit a bribe from him such that they can catalyse his refund. “They told me to agree with them on what percentage they can deduct before refunding back the balance,” Bajjo said. He further revealed that he had written piles of letters to the court in pursuit of his bail fee refund but none received a positive response.

At around noon as Bajjo was still labouring to narrate to journalists, Buganda road court police officers attached to counter terrorism unit called for reinforcement from the nearby Central police station which responded. A great deal of police officers bundled up on Bajjo and violently dragged him away from the court premises up to CPS where he remains locked up.

Our site has learnt that police intends to press fresh ‘Public nuisance’ charges on Bajjo. His confidant, Abitex Musinguzi castigated the judiciary for consistently bouncing off his colleague whenevet he would turn up to claim his money. “People come to court to ask for their bail refund but authorities keep on bouncing them till they give up,” Abited said. “Bajjo’s campaign will help expose all the fallacies in the judicial system,” he added.

Andrew Mukasa was charged with treason after a viral social media footage that depicted him vowing to oust Uganda’s dictator, Yoweri Museveni. Bajjo was accused of having used inciteful words that could sow hate within the citizens of Uganda. However, on July, 12 2019 Bajjo was granted a court cash bail amounting to shs 4 million. This year, court however gave a verdict in his favour, dismissed all the charges and ordered for a refund of his bail fees. Bajjo has since frequented at Buganda road in demand for the same but all his efforts did not yield.

He remains in custody of Central Police Station Kampala as more charges arise.