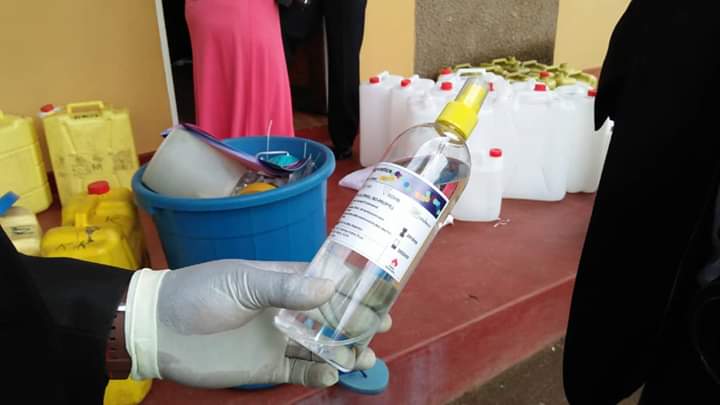 After yesterday’s presidential directive to implement a national lock down in wake of the looming Corona virus pandemic, many people are coming up with money making ideas to advance their reap from the situation.

It is barely a day since President Museveni made his remarks on the pandemic and people are already being innovative enough to harvest from the crisis.

Just this morning, police have already arrested a couple in Katwe II Zone, Kampala who have allegedly been making and packaging ‘fake’ sanitizers from their house. The said couple was using ordinary ingredients and packaging their finished product to sell to the unsuspecting buyers.

It should be noted that the ministry of health on Wednesday warned the public against buying fake sanitizers that have been brought on the market by some unscrupulous individual in the wake of the fight against the COVID-19 pandemic that has already engulfed the East African region. On the African continent, several cases have been reported and as of yesterday, a death in Burkina Faso tolled the continental deaths to two. The World Health Organization in a statement warned African countries of experiencing the worst of the crisis due to the stalemate in their health system. Uganda remains the only East African country without a confirmed positive Corona case.