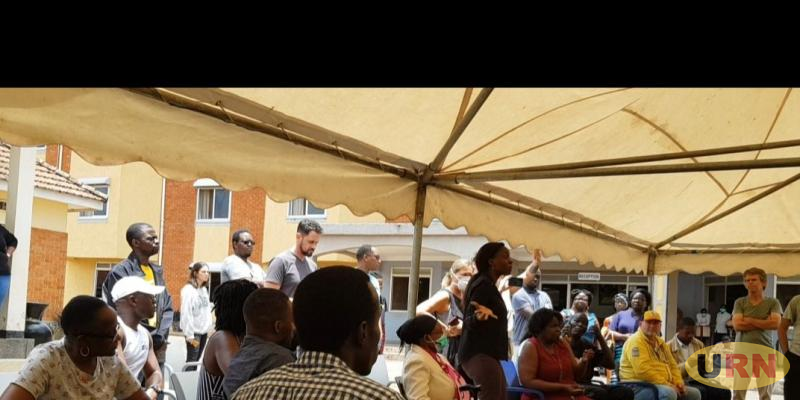 A number of travelers who entered Uganda through Entebbe are dissatisfied with services and costs charged at one of the Health Ministry recommended self-quarantine hotels.

The travelers being held at Entebbe Central Inn say apart from the costs, they were not fully informed about what they call restrictive self-quarantine guidelines at the point of their departure.

The Health Ministry in effort to keep Ugandans safe during the coronavirus outbreak requires travelers from some of the most affected country to go on quarantine for 14 days before they can be allowed to travel further into the country. All travelers are also required to meet cost of accommodation as well as meals during the period of stay.

But some of those at Entebbe Central Inn took on the social media to complain about the fees and the fact that they had not been attended by medical personnel from the time they were lodged at the hotel located a few kilometers from the Airport. They also questioned whether workers at the hotel who work on shifts may not be a danger given their interaction with those out of the hotel.

One of those who spoke to URN is a Mabel King a US citizen of Sierra Leone, origin. She had traveled to Uganda for a religious fellowship together with her daughter. She narrated that on arrival at Entebbe, their passports were confiscated before being herded to a van destined for Entebbe Central Inn.

Speaking in puffed anxious tones, King describes her experience as a horror. She they had no warning of what awaited them once they out of the airport.

Prior to traveling to Uganda, King says she had had budgeted her stay to cost less than three hundred and eighty thousand only to be charged the same amount at the hotel where they are required to stay for 14 days of self-quarantine.

She says with three traveling companions, she would have to part with close to eight hundred thousand shillings or two hundred dollar per day exclusive of meal charges.

Mabel King’s Self-quarantine will at most cost her over ten million shillings for the 14-day stay.

“I love Africa. These are my people and I understand the need for precautions. But we were not warned by the airline and nothing was reflected on the country’s website. This is my daughter’s first time in Africa and she is totally terrified. This needs to be rectified,” King adds.
URN called the hotel under the disguise of booking a room. The person at the receiving end informed our journalist that the 46 bed capacity facility is full at the moment. The earliest availability would be Monday at a cost of about two hundred and thirty thousand shillings (USD 60) for bed and breakfast.

According to the ministry of health guidelines, all persons from high risk countries have to undergo a mandatory 14 day quarantine. During this time, health workers assigned by the health ministry would visit the facility to check on the travelers.

Those who develop symptoms of the disease would then have blood samples taken and rushed to Uganda Virus Research Institute for testing. If found positive, they would be taken to Entebbe General Hospital for isolation and treatment.

However, those found negative, would continue their quarantine after which they would be issued a certificate of completion by the ministry of health.

Mary (not real name), one of the travelers who arrived at Entebbe from the US on Tuesday said from the time they were at the hotel, no doctor or ministry of health official.

Describing the situation at the hotel, Mary says it is a mess where everyone regardless of where they began their journey is confused, disgusted and tired.

She says due to the uncertainty of not knowing each other’s COVID-19 status creates an atmosphere of fear.

“Workers (hotel staff) come in and go out at their will. They are cleaning our rooms, talking to us when they do not have any protective gear, touching surfaces which we have already touched and at the end of the day, they walk out and come back the next day,” she said.

Victor Olumepu, a Nigerian working and living in Uganda who was returning from the United Kingdom and also trapped at the inn, is shocked that they are expected to meet the cost of their quarantine.

“Finally after being here for two days we met the ministry of health officials today but nothing much has changed. We talked and talked and they left,” Olumepu said.

According to the quarantined travelers, the meeting with the ministry did not solve their most pressing need at the moment of lacking food.

“Before the hotel would provide meals and record our expenses in their books. But when they heard we do not have money, they stopped giving us food. Today, if it were not for the help of a relative of ones of us who provided us with water, we would have gone hungry. Some of us do not have any money,”Olumepu adds.

Mary adds, on top of all their grievances, the quarantined travelers accuse government of favoring some people. They claim some travelers who were on the same flights with them where whisked away by Civil Aviation Authority staff and taken to unknown destinations.

The new travel restrictions and quarantine measures that the guests are held under were announced by the health ministry last week as some of the measures that government had decided to implement to keep the dreaded COVID 19 out of the country.

Previously, travelers were asked by the ministry to self-quarantine but according to ministry of health officials, the new measures were necessary after some travelers failed to comply.

The Director General of Health Services,  Dr Henry Mwebesa said he could not freely speak because  he was at State House.

He confirmed that they had met with the quarantined travelers earlier. The commissioner in charge of Public Health Emergencies, Dr. Allan Muruta said the persons making complaints at  Central Inn Entebbe were what called “Stubborn people who traveled to Uganda even after they were warned not to and refused to check in.

He says the ministry has been forced to hire police men to guard the unruly travelers.   //Cue in; “Stuck at Entebbe.

Muruta also refuted allegations that some travelers were whisked away by Civil Aviation Authority. He explained that they might have been taken to another hotel since they were not from category one high risk countries.

By the time of filing this report, Health Minister, Dr Jane Ruth Aceng was reportedly back at Central Inn Entebbe to meet the travelers in  an effort to calm down the situation.

Uganda has no confirmed case of Covid-19 but over 1630 travelers including Ugandans traveling back have been identified as high-risk for purposes of follow up. Over one thousand and seventy of those identified as high risk are Chinese, 2444 Ugandans, 43 Italians,  34 South Koreans and over 480 from other nationalities.

There were close to 990 travelers under self-quarantine with about 600 who had gone through the 14-day self-quarantine.  Twenty-six persons who had been presented with symptoms similar to the virus had tested negative.