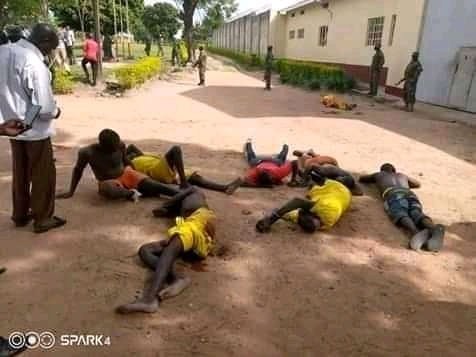 News coming in from West Nile indicates that at least three inmates have been shot dead as prison officers foiled a break out at Arua government prison.

The Northern Region prisons commander, George Lenga addressed the press and disclosed that the trio were shot dead ad they escaped from prisons claiming they were prone to the deadly Corona virus pandemic. “Some of those we re-arrested said they were scared of being wiped out by Coronavirus because their number in detention facility is big. We are yet in the process of identifying those who died,” he said.

Lenga confirmed that one of the officer of the Uganda prisons service was injured in the violent scuffle. He further intimates that at least seven other inmates were injured and several others fled into the neighbouring River Enyau and plunged further into the bushes.

Whereas concerned activists have asked government to relax sentences of remanded people serving light sentences in a bid to decongest the piled prisons, there has never been a single sign of acceptance. In such moments when the Corona virus is spreading widely, prisoners are some of the most vulnerable given the way they are packed in the cells. Lenga quashed the calls and defended the prisons claiming they are capable of containing the spread of Corona. “We have even installed sanitizers and hand washing facilities in prisons and we even have a fully equipped Health centre. So their reason of being wiped out if there is an outbreak does not hold any sense,” he said.