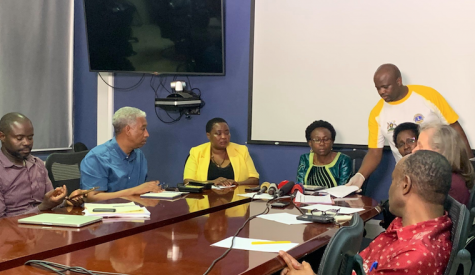 Uganda’s clean sheet has finally come to an end after a 36 year old resident of Kibuli tested positive for the deadly Corona.

In the emergency presser, the Health ministry revealed the 36 year old had travelled to Dubai about four days back for a business trip. It is suspected that he could have contracted the disease during his trip.

The patient is being kept in safe custody at Entebbe Grade B facility where he will undergo special care till he probably recovers. The unidentified man was travelling aboard Ethipian airlines and jetted into the country at 2am on Saturday morning hours. Other travellers who were aboard have been subjected to a monitored quarantine process and their passports remain in the hands of authorities for traceability purposes.

Uganda’s first case comes just hours after the president directed a total closre of Entebbe airport and other border points in a bid to contain the spread of the virus.

Corona virus pandemic spreads when an infected patient coughs in the air and that contamination gets inhaled by other surrounding people. Science has also disclosed that the virus can survive on equipment touched by the infected patients. Thorough cleaning and disinfecting contaminated places with sanitizers has been heavily recommended to curb the virus from spreading. Globally, several countries have declared a lock down as a means of keeping their populations safe. So far Italy is the worst hit zone accounting for about 36.5% of the total death toll surging a bit up than the Wuhan province where the disease was first reported.