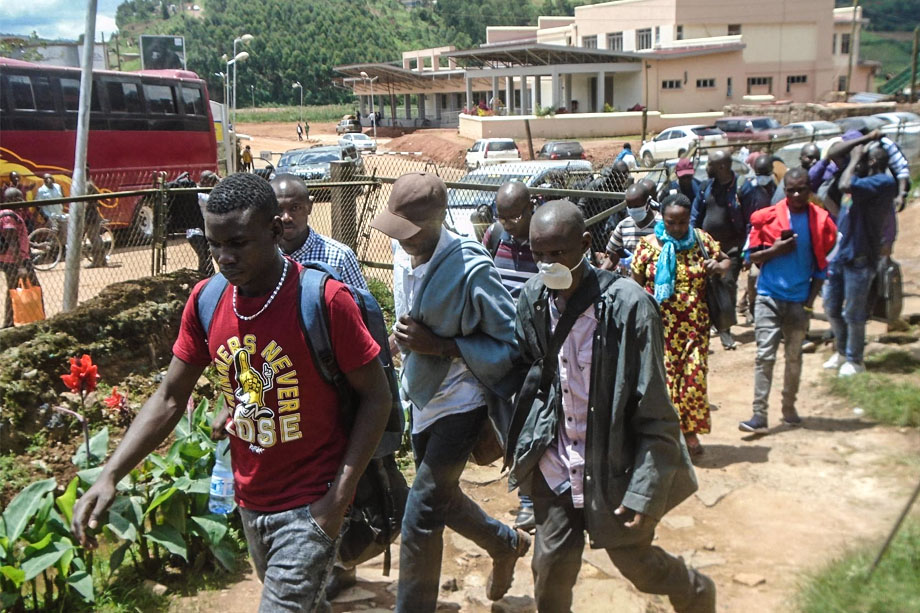 88 passengers who were crossing to Uganda from Rwanda are stranded at Katuna border after health officials failed to quarantine them.

The passengers among them four Kenyans, one Eritrean and 83 Ugandans were confined at Uganda’s no man’s land on Sunday at around 9 am. They were travelling in two Jaguar buses.

However, they were blocked from proceeding with their journey until after 14 days when their health status is monitored.

Elly Maate, police spokesperson for Kigezi region says that they cannot allow the people to proceed with the journey yet Rwanda is among the countries hit by the deadly COVID-19.

Maate, however, says that they are yet to decide where to quarantine them.

Darius Nandinda, Kabale Resident District Commissioner says that they are putting immediate measures of getting a hotel in Kabale town where they will be quarantined for 14 days at their own cost.

However, passengers who include; Ivan Mulumba, Stephen Niwagaba protested the quarantine saying that they don’t have any money for survival.  But, Nandinda insists that this is a global problem that cannot be taken for granted.

By press time, the affected passengers were confined at Manyengo playground Katuna as authorities wait for feedback from Health ministry.

Meantime over 50 Congolese and Burundian nationals are also stranded at Gatuna border in Rwanda after they were blocked by Rwandan authorities. The stranded passengers were travelling in a Trinity bus registration number RAD642G, Volcano buses number RAD 258H and RAD252H were also blocked last night on condition that the country’s borders were closed over Coronavirus.

On Saturday, Health Minister, Dr Jane Ruth Aceng announced the first case of Covid-19 in Uganda. The victim is isolated at Entebbe Grade B Hospital.